With a wide choice of body styles, the Renault Kangoo Z.E. electric van is more versatile than its main rivals and has a decent driving range 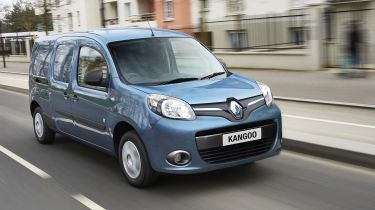 In a small field of competitors, the Renault Kangoo Z.E. is a front-runner in the electric light commercial vehicle (LCV) class, courtesy of Renault’s commitment to constantly developing its battery and electric-motor technology. Add the fact it’s offered in a range of bodystyles and it has plenty going for it.

Those van rivals include the Nissan e-NV200, but as the Kangoo Z.E. is also available as a Crew Van, you could also consider it as a practical electric MPV-style family car, especially as its price (with VAT added) is less than models such as the Nissan Leaf, Volkswagen e-Golf, Hyundai Ioniq Electric and Hyundai Kona Electric. In reality, the Kangoo Z.E. isn’t a patch on these models for quality, so you’d only be paying for the space and the electric drive the Renault provides.

The Kangoo Z.E. was launched in 2011 and has gone on to become one of the best-selling electric commercial vehicles on sale. It uses similar technology to the Renault ZOE supermini, so the current van gets a 33kWh lithium-ion battery pack and an electric motor that makes 60bhp. The 33kWh battery has a larger capacity than the original battery pack, although it takes up the same amount of space under the load floor as the older battery, and doesn’t compromise load volume in the back.

Renault quotes a driving range of 143 miles for the Kangoo Z.E. on the WLTP test, but the company admits you’re more likely to get 124 miles out of a single charge. That’s still better than its Citroen and Peugeot rivals. Renault also highlights the limitations of cold weather on the Kangoo Z.E., stating that you’re likely to experience a range of 75 miles when the temperature drops and you use the heating. Renault fits an ‘ECO’ switch that reduces throttle response at lower speeds to help boost the van’s range, although the extra effort to get the van moving counters any real benefit the system offers.

There’s a single charging socket on the Kangoo Z.E., located behind the blue-tinted Renault badge on the van’s nose. It has a standard Type 2 port behind it. The Kangoo Z.E. comes with a six-metre charging cable as standard, while Renault offers charging-point installation options from partner firm Chargemaster. Renault quotes a 17-hour charge time from flat from a standard three-pin socket, or six hours from a home wallbox. The Kangoo Z.E. doesn't have fast-charging capability beyond that. 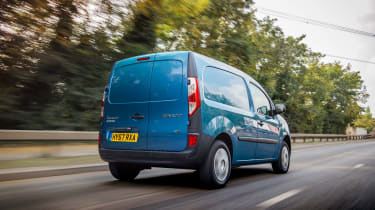 As already mentioned, the Kangoo Z.E. has an advantage over its rivals courtesy of the broader number of variants Renault offers. The Kangoo Z.E. shares its bodyshell and non-electric drive components with the Kangoo diesel van, so it can be offered in the same sizes. As a result, there’s a standard van, the Kangoo Maxi Z.E. extended-wheelbase variant, the Maxi Crew version with a three-person rear bench, and the Maxi Crew Cab, which also offers a multi-positional bulkhead, so you can carry passengers or more cargo.

The Kangoo Z.E. range starts with Business trim, which is modestly equipped, but you can upgrade the van with interior pre-heating and cooling to help maintain its driving range. There's also the Business+ model, introduced in June 2020 for deliveries in the Autumn, which Renault says features over £1,000 worth of equipment for just £600 more than the Business version's list price

Metallic paint, body-coloured front and rear bumpers, powered folding door mirrors, a central armrest, an overhead parcel and a practical rubber floor covering for the load area all thrown in, while the Business+ also gets one-touch electric front windows and rear parking sensors.

On the road, the Kangoo Z.E. delivers a typical electric driving experience. The modest power output means that while the van jumps off the line eagerly, it quickly runs out of steam. The Kangoo running gear is also pretty dated, with the platform able to trace its roots back more than a decade. That means the driving experience isn’t much fun, while the extra weight of the batteries makes it feel ponderous and slow to change direction, especially in Maxi guise. There’s plenty of load space, though, and the Z.E.’s total payload volume isn’t far behind the diesel Kangoo’s.

The interior is also showing signs of age. There’s masses of grey plastic and some flimsy switches dotted around, but at least Renault offers a touchscreen sat nav with extra information included about the Z.E.'s running gear. You also have the option to set the heater to bring the cab up to temperature at a set time when the van is plugged in and charging.

Overall, the Renault Kangoo Z.E. makes a strong case for zero-emissions vans. The latest version's bigger battery and punchy electric motor combine to create a van that’s well suited to urban use, and there’s every likelihood that if you use it in this environment you’ll be able to drive it all day without needing to recharge. It’s a shame the rest of the Kangoo package around the electric running gear is so basic, even in commercial-vehicle terms.

For a more detailed look at the Renault Kangoo Z.E., read on for the rest of our in-depth review. 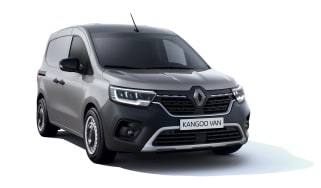 The latest Renault Kangoo small van has been unveiled, and like its predecessor there'll be a fully electric version
Skip to ContentSkip to Footer