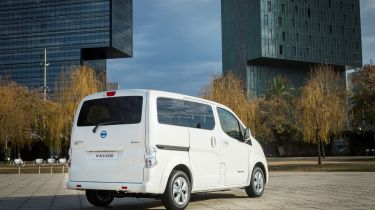 The five-seat e-NV200 is priced similarly to the Renault Kangoo Z.E. Maxi Crew, although that model is a more utilitarian choice than the Nissan. While the Nissan e-NV200 electric van is eligible for an £8,000 Plug-in Van Grant, the Combi MPV version only qualifies for the £3,000 passenger-car grant.

Company car drivers will see the appeal of the e-NV200, due to the fact (like all electric cars) there is absolutely no Benefit-in-Kind (BiK) tax to pay during the 2020/21 tax year. That will rise, but only marginally, to 1% in 2021/22 and another percentage point the year after.

All e-NV200 Combi models are road-tax-exempt. The other benefit of this electric MPV is exemption from the London Congestion Charge.

The e-NV200 Combi sits in insurance group 22. That’s higher than ratings for the Nissan Leaf, due in part to the Combi lacking the latest safety technology.

Nissan offers its five-year/100,000-mile warranty on the e-NV200, while the electric components are covered for the same time period, but limited to a total distance of 60,000 miles.

Nissan’s network of dealers is set up to handle aftersales care of electric models, and service plans are handled by dealers, rather than having a countrywide service scheme.

Electric MPVs qualify for free road tax, and as the e-NV200 Combi doesn’t break the £40,000 barrier, even those registered before April 2020 don't attract the £310 surcharge that owners of more expensive models have to pay the first five times they tax their car.

The e-NV200 is the only electric MPV available in its price bracket, but it doesn’t offer much in the way of desirability. Used values are low, but while early examples can be had for as little as £8,000, this latest version should hold on to its value better thanks to its longer range.