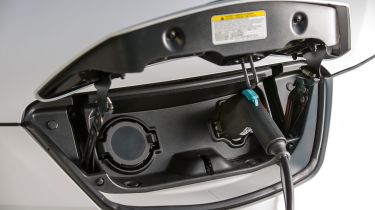 Nissan has improved its battery technology considerably since the e-NV200 Combi was launched in 2013. An update in 2018 saw the 40kWh battery from the latest Nissan Leaf hatchback installed. It’s the same size as the older battery, so doesn’t compromise space inside – not that there’s any issue with that in the Combi’s van-sourced body.

Nissan claims a maximum range of 124 miles for the e-NV200 Combi under WLTP test conditions, but you'll probably need to drive carefully and make some use of the van's regenerative braking and economy modes to make sure of hitting that in the real world.

A range of 124 miles is estimated for mixed high and low-speed driving. We think this is realistic for everyday motoring, especially if you’re regularly driving around town on short trips.

Go for a higher-spec Acenta or Evalia model and Nissan adds heating and cooling to the battery pack to help it deliver a more consistent energy supply. Nissan also offers a Heat Pack that allows you to heat or cool the interior before you drive, so the battery energy is saved for the journey.

The e-NV200 comes with a pair of charging cables: a seven-pin cable and a cable with three-pin plug. The latter is only really intended for topping up the battery if you’re caught short while out and about, because charging the battery from flat with it takes a massive 21 hours. Using the seven-pin connector sees that reduced to seven and a half hours when charging from a wallbox.

Higher-spec Acenta and Evalia models offer rapid charging through a CHAdeMO socket. This can recharge a flat battery to 80% capacity in 50 minutes, conditions permitting, although like the Leaf there’s a limit to the number of fast charges you can put through the battery in a 24-hour period to prevent it from overheating.

There’s an eight-year/100,000-mile warranty on the e-NV200’s battery. If battery capacity rises no higher than nine bars out of 12 on the dashboard display when recharging, Nissan will replace the battery free of charge under the warranty.

Mechanical and electrical components are covered by a five-year/60,000-mile warranty, while Nissan also provides a 12-year anti-corrosion warranty.