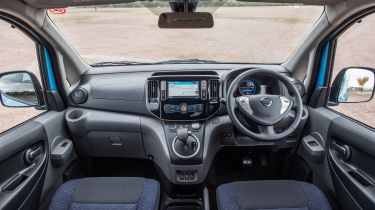 The e-NV200 Combi is based on a van that’s almost a decade old, so it’s no surprise that the interior fails to live up to the latest electric-car technology. Hard black and grey plastics are the order of the day, while grey carpets and plain cloth upholstery mean there’s a utilitarian focus about the interior.

There are two interior layout options for the e-NV200 Combi: five or seven seats. The latter costs around £700 extra, but reduces load space considerably. The chairs are bulky and heavy to remove and put back, so ask yourself if you really need the extra carrying capacity that they provide.

A two-speaker stereo is fitted to all models bar the Evalia, which gets an upgraded sound system. However, all cars feature Bluetooth for phone and audio connectivity, plus a USB socket.

A large circular display ahead of the driver includes a digital speedometer and various meters and trip-computer readouts that provide information about the Combi’s energy use and driving range. A horizontal meter displays throttle and braking use, another shows remaining charge and the trip computer can display your estimated range. The displays are all clear and easy to read, thanks in part to the cowled dials, which limit reflections.

Other dashboard displays are similar to what's found in the Leaf, with an identical climate control layout, and Evalia uses the same touchscreen sat nav as the Leaf, too. The Evalia also has some gloss-black plastic surrounding the touchscreen, but while it looks smart, it easily picks up fingerprints.

Standard kit is reasonable, with the basic Visia featuring 15-inch steel wheels with trims, halogen headlights and a stereo; Bluetooth phone connection, a USB socket and keyless starting are all included, too.

Acenta trim adds power-adjustable and folding door mirrors and air-conditioning, while cruise control with a speed limiter is also added. There are stereo controls on the steering wheel, a rear-view camera and the windows in the sliding doors are openable. Rapid charging is also included, while temperature control of the battery helps it to maintain charge capacity.

On top of that, the Evalia gets body-coloured bumpers and alloy wheels, LED headlights and privacy glass, while touchscreen sat nav with connected services and a DAB radio are also added.

Options on the Visia are limited to the rapid charge facility and heated seats, while Acenta and Evalia Combis can also have the side hinged doors from the e-NV200 van fitted, albeit with windows.

There’s a two-speaker stereo in the basic e-NV200 Combi, but the top-spec Evalia includes a touchscreen infotainment system featuring NissanConnect EV services, similar to the ones available in the Leaf. The latter is system is optional on the Acenta trim.

A smartphone app is available that allows you to track the car remotely, program charging times and monitor how charging is going. You can also set phone alerts to notify you of when the Combi is fully charged. There’s the ability to remotely activate the climate control, too, so the interior is up to temperature while the car is still plugged in, saving battery energy for driving.