The Nissan e-NV200 Combi is safe and secure, but not very quick – even without a full set of passengers on board 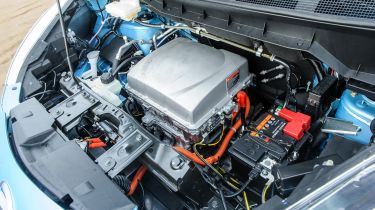 The second-generation Nissan Leaf has a host of new driving technology to go with its longer range, but that hasn't been extended to the e-NV200 Combi. Essentially, Nissan has just stuffed the Leaf's 40kWh battery where the old one was – the rest of the e-NV200 Combi's underpinnings are unchanged.

This platform is shared with cars like the ageing Nissan Juke and discontinued Nissan Note, and when combined with the Combi’s van-derived body, makes it unexciting to drive. Handling is safe and secure, but fun is in short supply, especially when the electric motor delivers modest performance.

Healthy torque from zero revs helps the e-NV200 Combi feel respectable off the line, but if you’re travelling seven-up, you’re only going to get modest performance rather than scintillating pace.

There are four different driving modes offered, called D, Eco, B and B/Eco. You select one of these to alter the power delivery of the motor and how much regenerative braking happens when you lift off the throttle. It’s a shame that the Leaf’s E-Pedal mode isn’t offered here, because that would encourage you to drive in a range-extending fashion without really thinking about it.

There’s a good view of the road ahead thanks to a high-set seat and the e-NV200 Combi is easy to place thanks to its light steering and that all-round visibility. It runs in silence, although there's a sound generator on board to help warn pedestrians and cyclists of its presence.

The Combi's electric motor makes a modest 107bhp, but torque on offer from zero revs means the e-NV200 sprints off the line eagerly. However, it’s not fast for long beyond that, as the 0-62mph time of 14 seconds reveals.

That’s quicker than a Renault Kangoo Z.E. Maxi Crew, and the 76mph top speed allows you to drive on the motorway without fear – except for the fear of decimating the Combi’s driving range.

Vague steering and the weight of those batteries mean the e-NV200 Combi isn’t the greatest handling car. Its van-derived roots are clearly on show in corners, and while the tall body means there’s plenty of lean, it’s not made any worse by the batteries, which are mounted low in the chassis.

On the move, wind and road noise are present at all times, but the carpeted floor and roof lining do at least improve refinement compared to the e-NV200 van. While the latest Leaf has Nissan’s newest semi-autonomous driving technology, it’s not present here. Instead, you just have cruise control with a speed limiter.