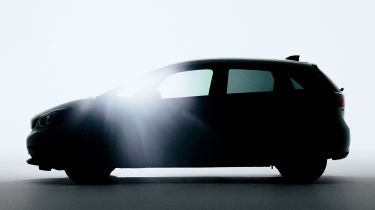 The future is electric. Virtually every car manufacturer has either launched or is in the process of developing a new electric car, and the technology is expected to dominate in the next couple of decades.

Today, only a small percentage of total vehicle sales in the UK can be attributed to electric cars, but their presence on our roads is growing at a rapid rate.

And as these cars show, it looks set to be very exciting indeed. While they're only concepts for now, the technology, battery performance and range these concept cars preview looks set to make it onto the generation of vehicles that we will buy and drive.

These are our top picks of the best electric concept cars that have been unveiled over the last couple of years... 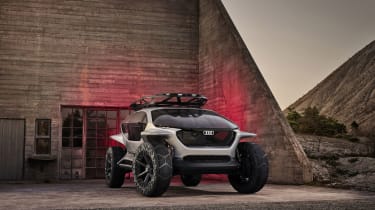 The AI:Trail is Audi’s bold vision for the future of off-roaders – and the brand hasn’t held back on the features. For instance, the dune buggy-styled AI:Trail comes with its own drones. These are designed to fly ahead and illuminate your path, projecting a video image into the car for a bird's-eye view of the road.

There’s also a magnetic torch that can be detached from the car that will beam directions in front of you when you’re off hiking, as well as neat hammock-style seating in the rear and useful storage areas for dirty items like hiking boots.

Designed to be 'Level 4' autonomous ready, the all-electric AI:Trail has four electric motors giving 429bhp. Audi hasn’t revealed details of the size of the AI:Trail’s battery pack, but says it'll travel about 311 between charges. Its maximum speed is capped at 81mph. Read more about the Audi AI:Trail. 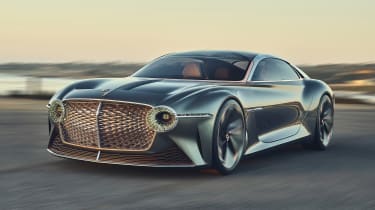 To celebrate its centenary early in 2019, Bentley showed off the EXP 100 GT concept; its view of what a luxury grand tourer will look like in 2035. To keep it light, the EXP 100 GT would be made from a mix of aluminium and carbon-fibre, and use solid-state batteries to keep its weight below two tonnes. With 1,400bhp from four electric motors, the EXP 100 GT will sprint to 62mph in just 2.5 seconds and top out at 186mph.

Meanwhile, with rapid charging, Bentley expects the EXP 100 GT to get to an 80% charge in just 15 minutes, with a predicted maximum range of 435 miles giving this car true grand touring potential. Inside, the centre console is made from 5,000-year-old oak, has 100,000 LED lights and a cartridge-style storage system for keeping drinks, food and gadgets out of sight. Read more about the Bentley EXP 100 GT concept.

Cupra is SEAT’s spin-off performance brand and this is its vision for a Tesla Model 3 rival. Called the Cupra Tavascan, it’s an electric SUV concept with 302bhp. With a pair of electric motors – one on each axle giving four-wheel drive – the Tavascan can cover 0-62mph in 6.5 seconds.

Power goes to a 77kWh battery pack, with a range of around 280 miles on a full charge. Inside, Cupra says the car is designed around comfort and performance. Highlights include sculpted 3D bucket seats, a ‘floating’ wing-shaped dashboard and two large displays, a 12.3-inch driver display and a 13-inch infotainment display. The Tavascan is named after a mountain village in the Pyrenees. Read more about the Cupra Tavascan. 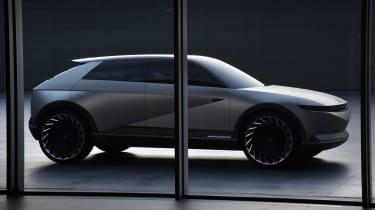 The Hyundai 45 is a homage to the brand’s first car, the Pony Coupe Concept launched, you guessed it, 45 years ago. Like its predecessor, the 45 is a masterpiece of minimalist design and signals a new styling direction for Hyundai. Inspired by sleek 1920s aeroplane shapes, the 45 is aerodynamic and lightweight.

Inside, the 45 teases some futuristic technology, such as a ‘projection-beam interface’ that replaces the need for a touchscreen by displaying information directly on the dashboard. It also has a Camera Monitoring System that uses cameras instead of mirrors to keep the outside appearance sleek. Read more about the Hyundai 45. 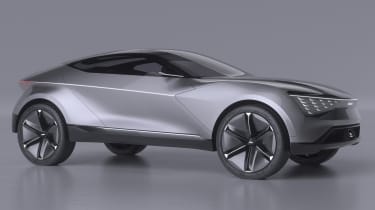 Revealed in China, the Kia Futuron Concept previews the design language the South Korean company believes it will apply to its electric cars in the future.

Designed to be "confident, sporty and modern", the Futuron Concept adopts an SUV-coupe bodystyle with efficient aerodynamics that maximise range. Kia says a 'high-capacity' battery is located under the floor, with all-wheel drive provided by four in-wheel electric motors.

The large, 'panoramic' glasshouse lets plenty of light into the cabin, which includes flexible seats that recline backwards when the car's Level 4 autonomous driving mode is engaged. 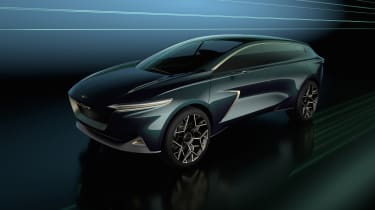 Aston Martin is reviving its Lagonda name as a separate luxury electric-car brand. Its first model is expected to be based on this Lagonda All-Terrain Concept. It's expected to go on sale in 2022 and follows on from the superyacht-inspired Lagonda Vision Concept, which was shown at the 2018 Geneva Motor Show.

The All-Terrain is a four-seater, with front seats that swivel to face the rears when the car is running in autonomous mode. Other standout features include rear-hinged back doors, opening roof panels and a rear shelf that rises from the boot floor to create a seat. 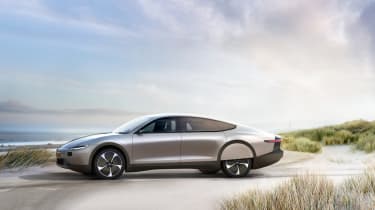 This is the One, a solar-powered electric car from Dutch startup Lightyear and the brainchild of former World Solar Challenge competitors. While the One can be charged like most electric cars by plugging in, it also has roof-mounted solar panels that boost range to 450 miles between charges.

Lightyear says this means it would only need to be plugged in 25 times over 12,000 miles, compared to 54 times for a Tesla Model S. The Lightyear One will cost £133,000 when it goes on sale in 2020 and is available to order now. Read more about the Lightyear One. 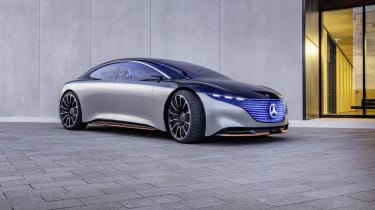 The Vision EQS is Mercedes’ concept for the future of sustainable luxury travel, giving us a sneak peak into how its halo models of the future will look. Standout features include its innovative front grille, comprising 940 LEDs, as well as digital headlights with holographic lenses that project 'floating' light.

Inside, Mercedes has looked to the world of superyachts for inspiration and it’s a fusion of modern art and high-tech luxury. There’s a 'floating' dashboard that blends with the body to form a one-piece sculpture, and individual displays on the driver and passenger seats.

The speakers are finished in rose gold and there’s a fragrance flask to ensure the car always smells fresh. Power comes from a 100kWh battery with electric motors on both axles, giving 469bhp and a 0-62mph time of 4.5 seconds. Mercedes says the EQS will average 435 miles between charges. Read more about the Mercedes Vision EQS. 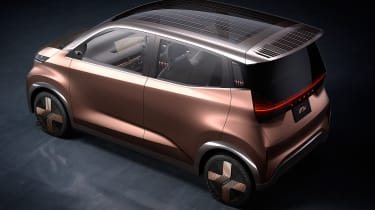 Nissan reckons its IMk concept is the ultimate urban commuter car, and it previews some of the new technology we should see on Nissans of the future. Autonomous driving systems such as ProPilot allow for “hands-off single-lane driving”, while a Remote Park feature allows the IMk to drop you off and then park itself.

Drivers can use their smartphones to control the IMk, and it'll automatically adjust seating positions, interior lights and climate control to each user’s default settings.

Inside, there’s a holographic display, which beams driving information on to the dashboard – there are no physical buttons. Drivers and passengers interact with the car using touch-sensitive surfaces. Read more about the Nissan IMk concept. 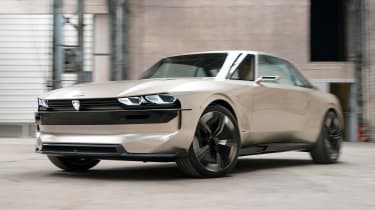 Peugeot’s e-Legend goes back to the brand's past with a design based on the beautiful 504 Coupe. While it’s unlikely to go into production, it previews battery and autonomous driving technology that could appear on future Peugeots.

With a 100kWh battery, the e-Legend has a range of 370 miles between charges, with two electric motors providing four-wheel drive, 456bhp and a 0-62mph time of less than four seconds.

Its top speed is a 137mph. Inside, there’s a huge 49-inch display in the footwells for watching films and playing games when running in autonomous mode. When running autonomously, the steering wheel and pedals retract to give passengers more space. Read more about the Peugeot e-Legend. 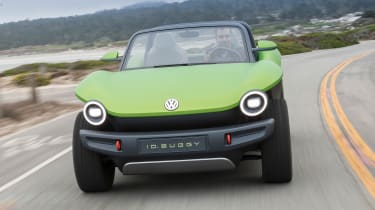 Volkswagen’s ID.Buggy is a modern interpretation of the American dune buggies of the 1960s and 1970s, which used Beetle running gear. While only a concept, it's built upon the Volkswagen MEB platform which will underpin the ID.3 hatchback, ID.4 SUV and ID minibus.

Designed for fun, the ID.Buggy has chunky tyres for off-road capability and a detachable roof canopy if it rains, although the doors are always exposed. There’s no infotainment system, though: instead, you can stream your music to the car’s speakers via Bluetooth and control the music and volume using touch-sensitive buttons on the steering wheel.

As for power and range, there's a 62kWh battery – the same as in the ID.3 hatchback – plus a 202bhp electric motor and a 0-62mph time of 7.2 seconds. It should see 155 miles between charges. Read more about the Volkswagen ID.Buggy.

Explore what businesses should know before installing their first EV charge points.

Download the whitepaper from Eon - brought to you in association with our sister site ITPro.