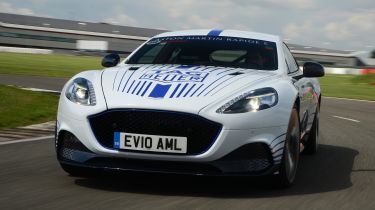 Ignoring the converted DB6 Volante, the forthcoming Aston Martin Rapide E will be the British manufacturer’s first proper electric car when it arrives in the not-too-distant future.

Based on the petrol-powered Rapide, this electric supersaloon harnesses a pair of electric motors to produce 602bhp, resulting in a 0-62mph time of under four seconds and a top speed limited to 155mph.

A 65kWh battery should return around 200 miles of range, and 100kW rapid charging will see a 0-80% top-up completed in a little over half an hour.

On the outside, some tweaks have been made: a new honeycomb grille, front splitter floor, rear diffuser and alloy wheels are designed to deliver an 8% improvement in aerodynamic efficiency, this boosting the range.

Inside, a 10-inch digital instrument cluster shows key information – such as the battery level, energy consumption and regenerative braking performance – to the driver, while the centre console houses typical features like climate control and an infotainment screen.

There are three driving modes: GT, Sport and Sport+ settings, all of which change the behaviour of the drivetrain and the suspension.

There’s also a dedicated smartphone app, which can relay charging information to drivers and load sat-nav instructions into the car ahead of a journey.

The reason the Rapide E exists goes beyond the wider industry’s transition to electric power: as if that weren’t enough of a challenge in itself, Aston Martin is using it as a learning exercise that will eventually lead to the revival of its dormant Lagonda sub-brand.

We’ve already been given a taste of what the rebirth will look like in the form of the All-Terrain SUV concept that graced this year’s Geneva Motor Show. When Lagonda returns, it'll be an electric-only luxury carmaker; a decision taken by Aston Martin CEO Andy Palmer, the man who helped launch the Nissan Leaf in his previous role at the Japanese company.

So why make Lagonda electric? “You can spend an awful lot of money on a Tesla,” reasons Palmer, “but it’s not really a luxury car. There’s a whole new breed of entrepreneur out there who want the best car their money can buy, but it has to be electric.”

That brings us to the Rapide E. Only 155 will be made, but every single customer – rumored to have paid something like £250,000 apiece – has agreed to provide feedback to Aston. Data will also give the firm a better understanding of how drivers use the car, a vital aspect given the electric powertrain within. 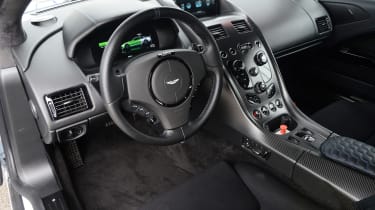 Using the Rapide as a test bed was “an obvious thing to do” according to Palmer: chiefly, removing the V12 engine leaves plenty of room for battery cells at the front of the vehicle.

“The balance of this car is actually pretty much the same as the V12,” he adds.

So what’s it like to drive? With Palmer at the wheel, we head out on Silverstone’s Stowe Circuit to see what the prototype can do.

"We’re understeering a little too much at the moment," Palmer admits, adding that Matt Becker – former handling guru at Lotus – and his team are working hard behind the scenes. There’s very little body lean when cornering, but the ride doesn’t yet feel as firm as it needs to be for such a high-calibre vehicle.

Although, as Palmer reminds us: "It’s still got to be a GT as well as a sports car." As you’d expect, the instant shove from the electric motors – both mounted at the back for rear-wheel drive and capable of generating 950Nm of torque between them – makes the Rapide E very quick in a straight line, with a loud wail replacing the soundtrack of the V12.

But it’s the agility that surprises most, with the car responding rapidly to steering inputs in spite of the weight added by the battery.

The brakes are impressive, too, and Palmer makes a point of demonstrating the car’s party trick, letting the back step out before drifting the Rapide E around a tight corner.

In just a handful of laps, it’s easy to forget that this isn’t meant to be one of Aston Martin’s most performance-focused cars. The target is to build a machine that can put together a handful of hot laps at the 13-mile-long Nurburgring, as opposed to one that can blitz a quarter-mile drag race.

On this evidence, there’s another brilliant Aston Martin in the works. And that’s great news for the future of Lagonda, too.