PSA Group brands confirm large electric vans, with electrified powertrains to be offered in mid-sized and small vans by 2021 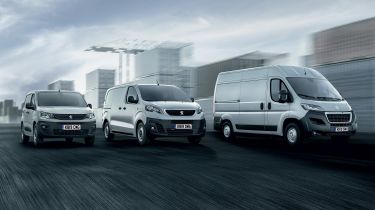 PSA Group – the parent company of Peugeot, Citroen and Vauxhall – has announced further details of its forthcoming electric van range at the Commercial Vehicle Show in Birmingham.

The company’s largest vans – the Peugeot Boxer (pictured) and Citroen Relay – will be offered with fully electric powertrains, with two range options depending on wheelbase size. L1 and L2 models will get a range of 141 miles, while the longer L3 and L4 models will manage 169 miles on a single charge.

However, these figures are derived from NEDC tests rather than more realistic WLTP figures, and the company estimates real-world range from the 44kWh battery to be between 99 and 140 miles depending on the spec of the van.

The Peugeot Boxer Electric and Citroen Relay Electric will both do a maximum speed of 55mph and can carry a payload of 1,215kg. Charging will take 16 hours from a standard domestic socket, eight hours from a 7kW charger or seven hours from a 22kW source. Prices and on sale dates are yet to be announced.

Mid-sized vans including the Peugeot Expert and Traveller, Citroen Dispatch and SpaceTourer, Vauxhall Vivaro and Vivaro Life, will all be offered with the option of an electrified powertrain in 2020.

PSA intends to offer an electrified option on all of its commercial and passenger vehicles by 2023, with the electric offensive set to start this year with the Peugeot 508 HYbrid, Peugeot e-208, Vauxhall eCorsa and DS 3 Crossback E-Tense.