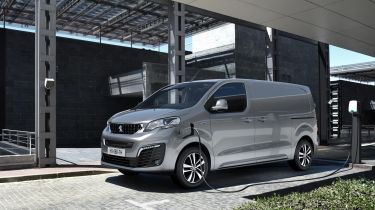 The Peugeot e-Expert has been launched with a choice of battery sizes, three load lengths, two body styles and a range of up to 211 miles. It's on sale now, with prices running from £25,053 for the entry-level panel-van version to £34,070 for the crew-cab model.

Like other pure-electric and plug-in hybrid vans, the e-Expert has been created with urban users in mind, in the context of increasing pollution legislation and low-emissions zones implementation in cities. The e-Expert is a sister model to the already-revealed Vauxhall Vivaro-e and Citroen e-Dispatch, and joins the smaller Partner and larger Boxer in Peugeot’s zero-emissions commercial vehicle line-up.

At first glance, the e-Expert is almost indistinguishable from its diesel counterpart. Apart from the charging port on the front wing, blue-tinted badging and unique grille, the electric van is visually identical. Inside, the instrument display has been tweaked to show things like energy flow and consumption, battery level, and an on-board computer detailing trip information and remaining range.

The e-Expert range is made up of three trim levels: S, Professional and Asphalt. The entry-level S is available in the Standard wheelbase length only, but with a choice of 50 or 75kWh battery sizes, priced at £25,035 and £29,965 respectively – before VAT but after the government's plug-in van grant has been applied. 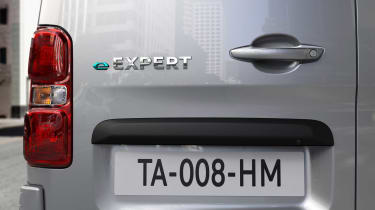 Like its Vauxhall and Citroen cousins, the e-Expert will be offered with a choice of batteries. The first is a 50kWh unit, which Peugeot claims will return 148 miles' range on the WLTP cycle. That’s an increase of about 20 miles on the maker’s initial predictions announced when the van was revealed late last year. There’s also a 75kWh version, which can do up to 211 miles on the same cycle – again, a jump of around 20 miles on previous estimates.

Depending on specification, the e-Expert can charge in as little as five hours from a home wallbox (e-Expert 50kWh using an 11kW charger) – and can achieve an 80% charge in 30 minutes using a 100kW public rapid charge point. The larger-battery van will charge in seven hours and 30 minutes (11kW) and 45 minutes (100kW) respectively.

Buyers can optimise the van’s range by using the various drive modes. Eco limits power for maximum mileage, while Normal is recommended for everyday use. The final setting is labeled Power, and prioritises performance “when transporting heavy loads”.

Peugeot claims the e-Expert will do 0-62mph 13.1 seconds (in Power mode) and has a top speed of 80mph. The van also projects an audible signal at speeds of less than 18mph, to warn pedestrians of its presence.