The NEXO's interior is suitably roomy and comfortable for a mid-sized SUV, but there are alternatives out there with more versatile storage and seating 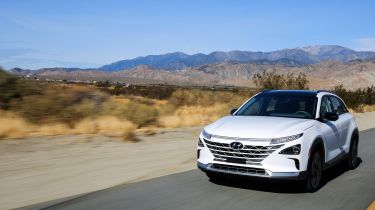 The NEXO is a fraction larger than popular mid-sized family SUVs like the Nissan Qashqai and Hyundai’s own Tucson, and you get an appropriate amount of room for people and luggage. It’s nothing beyond what you’d expect, though, in that there’s no useful sliding seats for rear passengers, or clever storage partition in the boot.

There are more cleverly thought-out family SUVs available for less than half the price of the NEXO, even if the Hyundai’s spacious interior, fold-flat rear seats and sizeable 461-litre boot will be just fine for most families.

The NEXO is spacious enough for most families, with loads of leg and headroom front and back. Occupants of the rear middle seat will also be fine for shorter journeys, as there’s only a small hump in the floor that doesn’t take up too much foot room, but the firm cushion and shortage of elbow room will get annoying after a while.

Those up front get loads of storage cubbies, including a sizeable area under the raised stack of switchgear, where there’s a wireless phone charging pad and room for your wallet and keys as well. There’s also a single fixed cup-holder next to the driver’s elbow, and a clever, additional pop-out cup-holder for the passenger.

With decent door pockets and a glovebox on top of all that, as well as a deep cubby under the armrest, you’re sure to be able to stow all your stuff easily in the NEXO. Those in the back get an armrest with cupholders, small door pockets and elastic net map pockets. There’s no seven-seat option in the NEXO.

The NEXO gets 461 litres of boot space, which translates to a decent-sized boot that should easily take your labrador and a load of muddy wellies. However, it’s worth remembering that there are far more versatile SUVs out there for well under half the NEXO's price.

Even a Skoda Karoq, with its sliding and removable seats, is usefully more versatile, and that’s before you consider the likes of the seven-seat Land Rover Discovery Sport, Skoda Kodiaq and Hyundai’s own Santa Fe – all of which are vastly cheaper.

At least the NEXO's seats do drop flat and split 60:40 to extend the load bay, although a fairly high load lip and wheelarches that cut into the boot space still make this less practical than plenty of alternative big family SUVs.