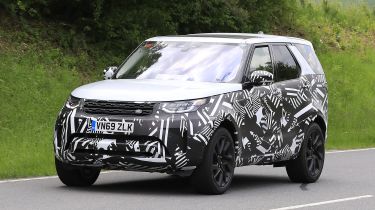 This is the next Land Rover Discovery, a facelifted model seen here testing under a light disguise ahead of a likely release later in 2020 or in early 2021. Despite fears that the latest Land Rover Defender would render the seven-seat Discovery obsolete, it appears Land Rover still has faith in its large family SUV.

Outwardly, it’s hard to tell where cosmetic changes have been made from the old model: it’s likely that any meaningful styling update will be limited to small detail changes to the bumpers, wheels and headlights.

The biggest changes will take place under the new Discovery’s familiar bodywork. In January 2020 a petrol-electric hybrid Discovery was spotted testing (according to registration data), while the car in these latest images uses a diesel-electric hybrid drivetrain.

It’s most likely these will be 48-volt mild-hybrid systems using relatively small ‘Ingenium’ internal-combustion engines – as seen in the latest Range Rover Evoque and Land Rover Discovery Sport – albeit with more power to account for the Discovery’s extra weight. 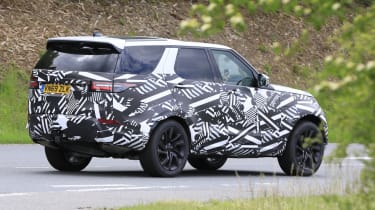 Mild-hybrid technology is almost guaranteed across much of the revised Discovery range, but it’s also safe to assume that a plug-in hybrid model will make it to production as a direct rival to cars like the Volvo XC90 Recharge T8 and BMW X5 xDrive45e.

While there are no official details on the subject, a plug-in hybrid Discovery could use the same drivetrain as the current plug-in Range Rover P400e, or something more akin to that found in the Land Rover Discovery Sport P300e.

We’ll have to wait for more official details to see exactly how the revised Land Rover Discovery range will take shape.