The NEXO is the best example yet of how easy a hydrogen car would be to live with, were infrastructure and purchase cost not so restrictive

The Hyundai NEXO is more of an engineering point-prover than a genuine ownership proposition for the average motorist. Powered by an electric motor that’s fed by a stack of hydrogen fuel cells, the NEXO is a large family SUV (a bit bigger than a Nissan Qashqai), which officially will do 414 miles on a full tank of hydrogen. The first major benefit of hydrogen-fuelled electric cars is that you can fill them just as quickly as you can a petrol or diesel car, and in much the same way, from a pump at a filling station. Hydrogen then powers the electric motor for much longer than most battery electric vehicles can manage, with the tank in the NEXO delivering around 400 miles of range in relaxed, everyday driving conditions. Hydrogen is also a very eco-friendly fuel. In fact, fuel-cell cars like the NEXO technically improve air quality, since they suck up air to mix with hydrogen in the fuel cells (causing a chemical reaction that produces electricity) and then emit nothing but water.

However, there are huge problems for hydrogen to overcome before this can be deemed a realistic transport solution for the masses. The first is that there are only a handful of hydrogen filling stations in the UK currently – most of them scattered around London. Then there's the cost of the technology, which is so prodigious that the NEXO costs as much as a Porsche Cayenne e-Hybrid or Jaguar I-Pace. Which would you rather have? Yup, us too. To add to the NEXO's woes, hydrogen costs around £12 per kilogramme (the Hyundai can hold 6.5kg in its high-pressure, 10,000psi tanks), so bearing that 400-mile range in mind, it’s actually more expensive to fuel than an efficient diesel or petrol car. At least Londoners don't have to pay the Congestion Charge or ULEZ fee, given that the NEXO emits zero CO2 from its tailpipe, just like a battery electric vehicle. It’s also as well equipped as conventional SUV rivals. Standard equipment includes a blind-spot camera, sunroof, heated and cooled seats, and a full suite of advanced driver aids, including semi-autonomous parking and driving modes. It’s a hi-tech thing in every way. Safety is nothing to fret about, either. History has given hydrogen something of an unfortunate reputation in this area, given its infamously explosive properties. However, the NEXO's hydrogen tanks – despite being pressurised to a frightening 10,000psi – are virtually indestructible.

In Euro NCAP crash tests, the NEXO actually did better than cars like the BMW X5 and Volkswagen Touareg for occupant protection and driver safety aids, so there's nothing to fear. It’s practical enough, too, with a 461-litre boot, rear seats that fold flat easily and all the storage and comforts you'd expect from a roomy five-seat SUV. 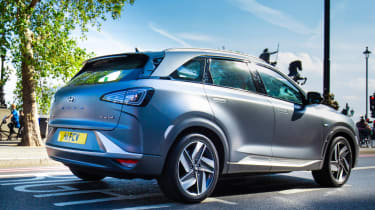 Despite all that, we’ll get straight to the point: We wouldn’t recommend you buy a Hyundai NEXO right now. The infrastructure needed to support hydrogen cars simply isn’t there yet, and the technology remains expensive enough to deter even the most zealous of early adopters.   Even all that doesn’t detract from how significant the NEXO is in proving the viability of hydrogen, though. After all, it’s a spacious front-wheel-drive family SUV that’s a pleasure to drive – quiet, comfortable and safe – and will do 400 miles on an electric motor after filling up for a couple of minutes at a fuel pump.

With enough solar-powered hydrogen filling stations installed around the country, hydrogen would solve the issues of range anxiety and charging time still inherent in battery electric vehicles, and actually better their ecological standing, too. But we’re not remotely there yet with the infrastructure or costs. And while the NEXO is peachy to drive, and does an important job of demonstrating how viable hydrogen cars could be with the right financial backing, there’s no getting around the fact that for now and for the foreseeable future, it remains more a marketing tool than recommendable transport.

For more on the Hyundai NEXO, read on for the rest of our in-depth review. 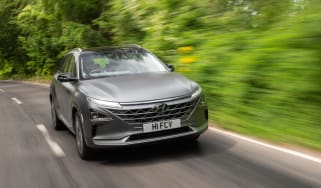