The BMW i8 was arguably the original hybrid sports car, delivering striking looks and a thrilling drive 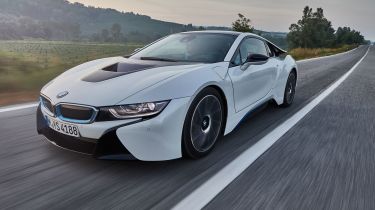 Buy used for less at Buyacar

The BMW i8 was arguably the very first plug-in hybrid (PHEV) performance car. While it wasn’t as fast as a comparable Jaguar F-Type or sharp to drive as a like-for-like Porsche 911, it set the benchmark for alternatively-fueled sports cars. Spaceship looks, a low-slung driving position and a logical, high-quality cabin gave it all the right ingredients – and yet when production ended in April 2020, the i8 had no direct successor.

Now, if you want something that offers this kind of performance and quality, you’ll be looking at the Honda NSX – a mid-engined hybrid sports car that's even faster, but can’t plug in, so has much more limited electric-only driving capability. The Lexus Lexus LC is also a full hybrid (or 'self-charging' hybrid as the Japanese brand calls it) – this means you can’t plug it in, either, but it does offer stunning coupe looks, a high-quality cabin, and a 2+2 seating layout like the i8, plus more practicality thanks to a decent-sized boot.

The i8 is defined by its driving experience. The combination of a small petrol engine and electric motor is a technological tour de force and means it’s easy to drive – and easy to drive fast – thanks to the sophistication of that futuristic powertrain. The i8’s 228bhp 1.5-litre three-cylinder turbocharged petrol engine mounted in the middle of the car drives the rear wheels through a six-speed automatic gearbox. There’s a 141bhp electric motor mounted in the nose, too, driving the front wheels, so the i8 also has four-wheel drive capability.

The total combined power output of 369bhp is impressive given the i8 only weighs 1,535kg. This figure is kept quite low thanks to the lightweight aluminium and carbon-fibre construction offsetting the heavy battery pack. But the i8 is not only kind to the planet, it’s also kind on your wallet too – providing you can afford to buy one in the first place. BMW claims efficiency of up to 123mpg and CO2 emissions as low as 49g/km, as well as a 23-mile pure-electric range. The i8 is also exempt from the Congestion Charge, which is handy if you regularly travel into London for work or leisure.

The interior matches the advanced powertrain, with four different specification combinations to choose from, while all cars are trimmed in luxurious leather and feature the level of quality and kit you’d expect from a high-end BMW. 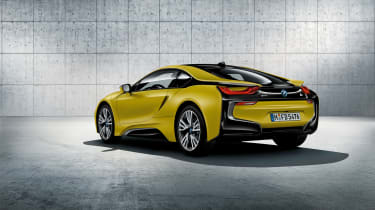 The highlights include BMW’s brilliant iDrive infotainment setup that’s been refined over so many years. It’s intuitive and simple to navigate around, while a digital cockpit display gives readouts on electric-only range, efficiency and other functions to do with the hybrid system. The infotainment’s connected services also show you charging points across the country overlaid on the sat-nav map.

As this is a low-slung 2+2 car, there are, however, some inevitable practicality drawbacks. Boot space is on the small side at 154 litres, the interior is tight and visibility isn’t great – but this is true of most sports cars, and its rivals don’t boast the same level of technology as the BMW.

But that healthy power output and relatively low weight means the i8 delivers performance to match conventionally powered sports cars without troubling your conscience quite as much. It feels agile and playful, while the shove from the electric motor never fails to rise a smile. Despite its skinny tyres there is plenty of grip, too.

Plugging in to charge is a simple process (every car comes with a three-pin plug and a wallbox cable supplied) and recharge times realistically vary from around four and a half hours from a standard wall socket, to less than two hours for a home wallbox.

If you’re looking for a car that combines performance, advanced technology, driver enjoyment, style and efficiency, then the i8 really is without a rival. A round of updates in 2018 to coincide with the arrival of the i8 Roadster gave it more power and greater electric capability, so if you can stretch to one of these, we’d definitely recommend it.

For a more detailed look at the BMW i8 Coupe, read on for the rest of our in-depth review.

More on i8 Coupe