While the BMW i8 Coupe isn’t cheap, it delivers running costs more comparable with a family hybrid than a high-performance sports car 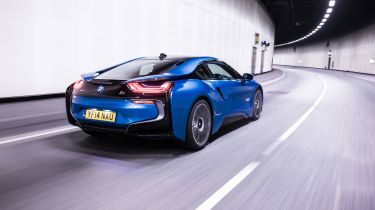 Any car costing six figures is a lavish purchase by any standards, and you can have a Porsche 911 that's faster and costs less. Even so, you’ll find the BMW i8 offers value for money in many areas.

Firstly, the combination of that petrol engine and hybrid system wasn’t cheap to develop, so given the i8’s price tag is comparable with other sports cars that offer this level of performance and exclusivity – not to mention the clever and advanced carbon-fibre construction – the BMW is actually relatively fairly priced. Besides, it has basically no direct rivals.

However, despite the i8’s eco credentials, the fact that it's not a completely zero-emissions vehicle means it doesn’t qualify for the government plug-in car grant, so there’s no financial incentive – although if you’ve got more than £100,000 to spend on a car, you probably don't need one.

The i8 comes with a 30-litre fuel tank as standard, which BMW claims will give you a total cruising range of 273 miles. Go for the optional 42-litre fuel tank and this cruising range increases to 373 miles – factor in the 23 miles of zero-emissions electric running thanks to the battery pack and electric motor and a 400-mile-plus claimed range is possible.

Of course, if you regularly explore the i8’s performance then expect this to decrease dramatically, but based on current petrol prices an annual fuel cost (12,000 miles) of around £1,500 based on our real-world economy figures is good – especially when you realise a conventional sports car would easily double that. Keep the i8 topped up by charging it at home and/or at work and this will drop further, as most average journeys won’t exceed the car’s total electric range. The petrol engine is there to add flexibility and eradicate range anxiety.

Due to its high purchase price and advanced technology, it’s no surprise that the BMW i8 falls into the top insurance group, band 50. However, this is no worse than similar petrol or diesel-powered conventional performance and luxury cars. Exact premiums will depend on your circumstances, but to give an indication of what a middle-aged driver with a clean licence should expect to pay, budget for around £1,850.

As we’ve seen above, the i8’s warranty package is comprehensive, so you won’t be left high and dry if anything should go wrong with the advanced powertrain – not that we would expect this to happen, obviously. We’ve not heard any horror stories about the i8’s powertrain since the car was launched four years ago, so you can expect this to be a reliable package.

BMW has 153 dealers across the UK, so you shouldn’t find yourself needing to travel too far when the i8 needs a service. BMW offers its Service Inclusive package as standard on the i8. This includes servicing for three years/36,000 miles, based on 12,000-mile per year service intervals. This means your car will have a BMW main dealer service history.

As the BMW i8 is a hybrid, you get a slightly reduced road-tax rate of £135 a year, compared to £145 for a conventional petrol or diesel-engined car. However, as it costs more than £40,000, it also attracts a £320 VED surcharge, so you’ll pay a total of £455 a year in road tax up to and including the car's sixth year on the road.