The NSX feels futuristic, is great fun and savagely rapid, but it’s no more efficient than a non-hybrid 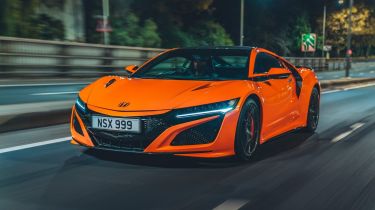 The Honda NSX is a direct rival to the plug-in hybrid BMW i8 Coupe and other less eco-conscious sports cars like the Audi R8, McLaren 570S and Porsche 911 Turbo. There’s no mistaking it for anything other than a top-end sports car, or some might even say a supercar, given the 3.3-second 0-62mph time and rather punchy £148,000 price tag.

Power is in plentiful supply, with 573bhp streaming from a 3.5-litre twin-turbocharged V6 petrol engine (which accounts for 500bhp on its own) and three electric motors – one on each front wheel and one on the rear axle – to provide four-wheel drive.

Of course, there are a number of driving modes that can alter the car’s character to suit the occasion, from whisper-quiet commuter to face-bending supercar thriller. 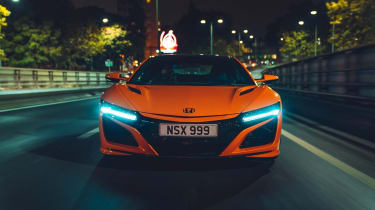 That said, the NSX is a heavy car by the standards of its peers, and that shows with handling that's invigorating, but not quite as playful and adjustable as that of a McLaren. Still, it’s up there with the Porsche 911 and Audi R8 for fun and handling character, which is no small compliment.

We’d like the NSX to make a bit more noise about that savage performance, as it doesn’t have quite the rebellious, howling soundtrack that you expect of a car that so clearly puts fun first on the agenda.

For a more detailed look at the Honda NSX, read on for the rest of our in-depth review.