Audi's first production electric car is impressive, but also outclassed by rivals like the Jaguar I-Pace and Tesla Model X

This is Audi's first-ever full production electric car: the e-tron. It's a hugely important model for the company, heralding the arrival of a range of e-tron-badged electric Audis in the coming years. So how does it stack up as a first effort?

The answer is: well enough, if not good enough to be class-leading. As a rival for standard-setting cars like the Tesla Model X, Jaguar I-Pace and Mercedes EQC, the e-tron needed to impress – and it does.

The UK rapid-charging network is in its infancy, meaning you'll only be able to make limited use of the e-tron's 150kW charging capability, but an official range of over 270 miles should negate the need for regular public charging for most drivers. For those who don't need as much range and are keen to save on purchase costs, the e-tron 50 uses a smaller 71kWh battery, produces less power, wears a smaller price tag (from around £60,000) and has an official range of 186 miles. If it's style you're after, the rakish e-tron 55 Sportback is for you – although no 50 version of this version is available yet.

Of course, as the words 'luxury' and 'SUV' suggest, this isn't a cheap car. But as with all electric cars, ongoing running costs will be low, and for your money you're getting a large, practical, family-friendly SUV that's bristling with cutting-edge tech.

The e-tron is available in six trim levels: Technik, Sport, S line, Black Edition, Vorsprung and S. For now, non-Sportback e-tron 55 models are only available from dealer stock, but Audi hopes to reintroduce the larger battery with this bodystyle at a later date.

For now, the range consists of the e-tron 50 in standard form, or the e-tron 55 as a Sportback. The former comes in Technik, Sport, S line, Black Edition or Vorsprung trim, with standard equipment on the entry-level model incrementally added to with each step up. All cars get LED headlights, a virtual cockpit display, dual-zone climate control and leather seats.

There's also the performance-orientated e-tron S, whose order books opened in summer 2020. We've yet to drive it, but its 496bhp drivetrain, sportier four-wheel-drive system and wide-bodied styling look very promising.

Inside, there are two touchscreens in the middle of the dashboard with a third digital display behind the steering wheel. The e-tron uses Audi's Virtual Cockpit system, which includes a clever sat nav that can divert to charging points should a battery top-up be required. Meanwhile, boot space is commendable: 660 litres with the seats up, with a further 60 litres in a compartment in the front of the vehicle accommodating the e-tron's charging cables. 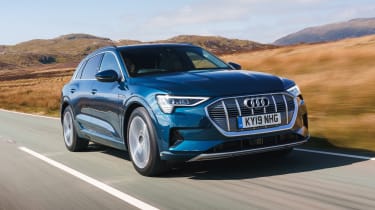 One thing that isn't cutting-edge about the e-tron is its looks: it's not all that different from Audi's conventionally powered SUVs like the Q5 and Q7. Depending on your outlook, this is either a good or a bad thing. Those who like to shout about their 'early adopter' status will be disappointed; those who'd rather not draw attention to themselves will be happier in the e-tron than they would in a Tesla.

Underneath, you get the very latest electric drivetrain technology: electric motors on the front and rear axles give quattro four-wheel-drive capability, with a total output of 308bhp in both the 50 and the 55. However, the e-tron 55 comes with a boost function that lifts this to 402bhp for bursts of eight seconds, resulting in a 0-62mph time of 5.7 seconds and top speed just shy of 125mph. The e-tron 50 isn't too much slower, with a 0-62mph time of 6.8 seconds. The e-tron S is the fastest of the bunch courtesy of its 4.5-second 0-62mph time.

The e-tron also boasts an Audi Drive Select system with seven different driving modes. It does feel quite heavy from behind the wheel, though, with no amount of technology able to completely disguise its bulk. But while enthusiastic drivers may be left cold, the e-tron is extremely comfortable and refined in everyday motoring, thanks to standard air-suspension.

Overall, the e-tron is a compelling addition to the range of high-end electric SUVs available to UK buyers, and is worthy of serious consideration alongside the Model X, the I-Pace and the EQC. To find out more about the Audi e-tron, read on for the rest of our in-depth review. 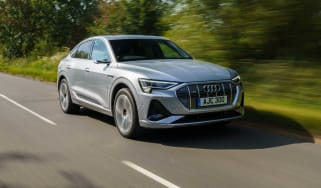 The Audi e-tron electric SUV now has a coupe-style 'Sportback' variant – but is it worth paying more for?
Audi e-tron 2020: prices and specs revealed for 50, 55 and S models 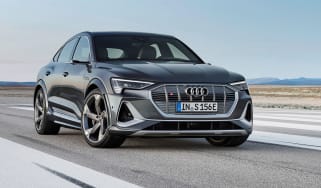 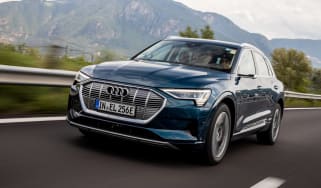 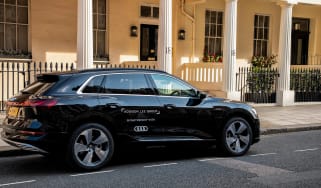