Audi was late to the plug-in hybrid party with its A6 50 TFSI e, but it's a decent enough crack at a tax-efficient large company car 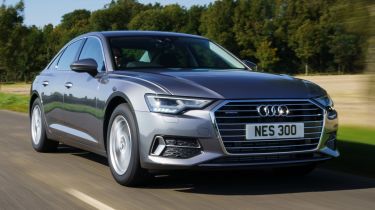 It has been a long time coming, especially given that just about every rival manufacturer has already jumped on the bandwagon, but Audi is finally selling a plug-in hybrid version of its A6 executive saloon. The A6 50 TFSI e is the German brand's answer to the BMW 530e, Mercedes E 300 e and Volvo S90 Recharge T8 – all of which exist primarily to satisfy the needs of company-car users.

The current generation of A6 has been with us since 2018, available with a range of mild-hybrid petrol and diesel engines, with more powerful models boasting four-wheel drive. The 50 TFSI e uses a familiar 2.0-litre petrol engine in conjunction with an electric motor, with power for the latter coming from a 14.1 kWh battery. Total system output is 295bhp, while Audi claims 34 miles of pure-electric range is possible.

Company-car users will be most interested in CO2 figures and Benefit-in-Kind (BiK) ratings, so it's good news that with emissions as low as 35g/km, the A6 50 TFSI e slips into the all-important 10% BiK bracket – the same as occupied by the BMW 530e.

Fuel economy claims are impressive, as is the norm in this class. That's because the official figures rely heavily on all-electric running on fully charged batteries – so you have to be sure to keep yours topped up to get close to the official number of 188mpg. However, if you regularly travel shorter distances within the car's 34-mile range (more like 25 in the real world), there's scope to avoid using any fuel – perfect for commuting or trips to the shop.

The A6's closest rivals from Mercedes and BMW are both decent to drive, so it's encouraging that it manages to keep pace in this department. It's a refined and smooth car with a purely petrol or diesel engine fitted, so things are particularly refined when driving on electric power alone. The usual trio of drive modes allow you to make best use of the battery's charge, and when in Auto, the car does a good job of keeping the petrol engine out of the equation unless you push quite hard with your right foot. It's not the most fun from behind the wheel, but it's as effortless and confidence-inspiring as a large Audi should be.

The main difference between the 50 TFSI e and its mild-hybrid counterparts is that there's more weight on board: the car's suspension has had to be adjusted to suit. This means a slightly less supple ride, which – while not exactly uncomfortable – will be noticeable if you've spent time in another A6.

Everything you could want from an Audi is present and correct, however: sharp, sophisticated styling, an immaculately built interior and strong infotainment that uses a pair of touchscreens and a third driver's display behind the steering wheel. Equipment is generally good across the range, but it pays to make sure you're getting everything you need on lower-spec models – Sport does without power-adjustable seats, for example.

While it does feel that Audi is late to the party, the A6 50 TFSI e is a solid contender and a good alternative to its more established rivals. However, both the BMW 530e and Mercedes E 300 e have either comparable or superior electric range, while the BMW is better to drive and the Mercedes a little plusher. There's not much to separate them on running costs, however – especially for company-car users.

For a more in-depth look at the Audi A6 50 TFSI e, check out the rest of our detailed review...

Show me:
Audi A6 hybrid 2020: prices, specifications and on-sale date 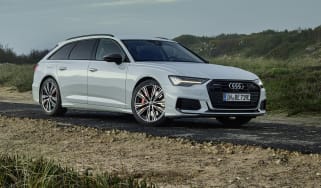