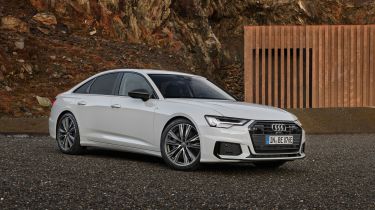 This is the new Audi A6 50 TFSI e, a plug-in hybrid version of the German manufacturer’s BMW 530e rival. It’s on sale now, priced from £52,790, available in the usual Sport, S line, Black Edition and Vorsprung trims. The car has been launched as a saloon, but will be available later in Avant estate form.

The A6 50 TFSI e is powered by a 2.0-litre four-cylinder petrol engine and an electric motor, which together produce 294bhp and 450Nm of torque, fed to the front wheels by an eight-speed automatic gearbox.

Audi has promised a great combination of power and efficiency from the A6 50 TFSI e – 0-62mph takes 5.5 seconds, while CO2 emissions of 35g/km will keep both road and company-car tax low, while also qualifying for London Congestion Charge exemption until October 2021. Exact fuel-economy figures have yet to be announced.

Audi claims that this least powerful A6 hybrid (a six-cylinder 55 TFSI e model is on the way) can travel at up to 34 miles on pure-electric power. In this mode, the car can reach speeds of up to 84mph.

The car can be operated in three different drive modes: EV, Hybrid or Hold. The first allows for all-electric driving, while Hybrid makes the most of both power sources and the last one lets you hold on to the battery’s charge until it's needed later in a journey.

Charging is done with the supplied Type 2 cable; connected to a 7kW AC supply, a full charge will take around two hours and 30 minutes. Audi says that charging times from a public 7.4kW charger will be "upwards of 2.5 hours".

Certain hybrid elements of the car can be controlled by the myAudi smartphone app, including charger location, activation and payment, along with the car’s climate control and charging schedule. 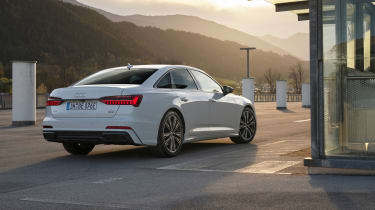 In 2019, Audi confirmed details of the 55 TFSI e plug-in hybrid version of its A6 executive saloon – a direct rival for the BMW 530e and Mercedes E-Class hybrid. It hasn’t gone on sale in the UK yet.

It joins the already-unveiled A7, A8, Q5 and Q7 plug-in hybrids in the German brand's line-up. Total power output from the four-cylinder petrol engine and electric motor is 362bhp, while maximum torque is 500Nm.

A 14.1kWh battery offers an electric driving range of up to 33 miles and the car can travel at motorway speeds on battery power alone. With the motor and engine working in unison, 0-62mph takes 5.6 seconds and the top speed is limited to 155mph.

Claimed fuel economy stands at 134 to 149mpg, while CO2 emissions will range from 42 to 47g/km depending on exact specification, assuring low company-car tax and granting exemption from the London Congestion Charge until October 2021.

As with the 50 TFSI e, three drive modes give the driver control over the hybrid drivetrain: EV mode prioritises electric running, Hybrid mode lets the car work out the most efficient combination of petrol and electric power itself and Hold mode preserves charge in the battery for use at a later point in the journey.

The A6 hybrid will charge at up to 7.4kW from a home wallbox or public charging point; an empty battery can therefore be replenished in around two-and-a-half hours. 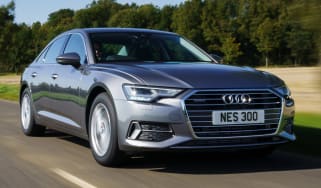