The A6 TFSI e is a smooth, refined and powerful saloon car, but it's not as engaging to drive as its BMW 530e rival 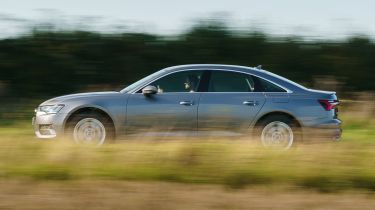 The Audi A6 has generally lagged behind the BMW 5 Series when it comes to driving fun, existing as something of a halfway house between that car and the more comfort-orientated Mercedes E-Class. Plug-in hybrid power has made the Audi more refined than before, with near-silent low-speed driving possible, and when the petrol engine does kick in, it's not exactly raucous.

The A6 TFSI e feels much like any other large Audi in the way it combines comfort with all-weather grip and confidence. It stops short of being fun, but it's relaxing and confidence-inspiring all the same. However, it's worth noting that you can have a four-wheel-drive version of the BMW 530e if you wish – a car that combines similar ability with a bit more engagement, if that's what you value.

On the move, the A6 feels well engineered – there's only a slight vibration when the petrol engine kicks in, the firmer suspension remains pretty well damped and build quality is great – although our test car did have a suspect rattle coming from its dashboard.

One feature that some may find distracting is what Audi calls its Active Accelerator Pedal, which attempts to assist with throttle modulation when driving in pure-electric mode by offering variable pressure points and haptic feedback. We'd prefer a more conventional setup.

There's not much to complain about on the performance front, with the 0-62mph sprint taken care of in 5.5 seconds and a top speed of 155mph. There's enough torque on hand to make overtaking easy and safe – but you'll need to make sure the battery is topped up to get the most of the electric motor's extra oomph.

For what it's worth, the A6 is a little sprightlier than the equivalent four-wheel-drive BMW 530e, which takes 6.2 seconds to get to 62mph. The 50 TFSI e uses a dual-clutch automatic gearbox that's not the smoothest when changing gears. Manual control is available using steering-wheel-mounted paddles or the centrally mounted gear selector.

The Audi A6 50 TFSI e isn't a 'driver's car', but it can hold its own in most everyday situations. The previously mentioned weight penalty means the suspension has more work to do and is tuned to be slightly stiffer to account for the extra mass. Still, the car remains comfortable and body control is fine.

The steering is light and accurate, but lacks the sort of feedback you can enjoy from a BMW. It's not the most fun, then, but you may well enjoy the effortless nature of the Audi A6 rather than missing any of the sportiness it lacks – especially if you spend most of your time around town or on the motorway.