The Audi A6 TFSI e is big enough inside to seat four adults in supreme comfort, but boot space is less than in the purely petrol or diesel versions 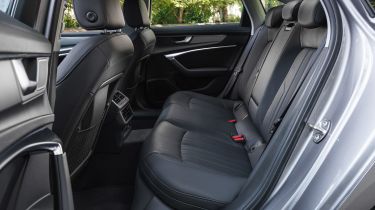 Whichever way you look at it, the Audi A6 is a large car. The result is plenty of space for passengers front and rear, and what would usually be a large boot. However, due to the A6's battery and electric motor having to be accommodated, a sacrifice has been made here that may affect your choosing of the hybrid over a diesel or petrol A6 – or indeed a more spacious plug-in rival.

Despite its size, however, the A6 is an easy car to drive, with a good driving position and clear visibility. Pick the £2,295 Comfort and Sound pack and you'll get a 360-degree camera system that makes manoeuvring in tight spots like multi-storey car parks a doddle.

We'll get to the boot issue in a moment, but there's little to complain about in the rear seats. There's more than enough space for a six-foot adult to get comfortable in each of the outer seats, although the large central tunnel means the middle one isn't quite as accommodating.

ISOFIX points are easy to access, and while those fitting child seats will have to stoop further than in an equivalent SUV, the A6's sensible roofline makes access easy enough. The tinted rear windows of higher-spec cars can make things feel a bit dingy in the back, but this can be considered an occupational hazard with executive saloons.

Ordinarily, the A6 saloon would have 530 litres of space available for your luggage, but that figure has shrunk to just 360 litres in the TFSI e. It's a common problem with plug-in hybrids that are based on existing petrol and diesel models, although the Audi's rivals seem to make a better job of this conversion.

The BMW 530e, for example, loses 120 litres but still has 410 litres in total. The good news is that while BMW charges extra for the privilege, Audi includes a folding rear bench as standard, with a 40:20:40 split that allows the two outer rear seats to remain in use if needed.