Thinking about leasing an electric van? Here's a starter guide 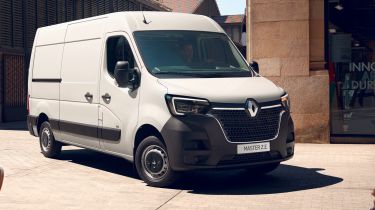 Electric vans, much like their passenger-car counterparts, are enjoying a surge in popularity. As battery technology improves, so too does consumers' willingness to accept it as a viable alternative to internal-combustion power.

This is particularly pertinent in a market that has long depended on the low-down torque, reasonable fuel economy and good range that diesel engines provide; if it weren't for emissions, particulates and other environmental concerns, they'd still be perfect for the job.

Electric vans remove local emissions from the equation, produce much less noise than their oil-burning counterparts and their lack of moving parts means that there's less to go wrong. These traits mean that electric vans make a lot of sense, especially in urban areas.

But how do you go about making the switch? Read on to find out if an electric van lease is right for you.

What are the benefits of electric vans?

Modern electric vans still aren't quite a match for the most popular diesel models when it comes to performing some heavier-duty or longer-distance jobs. However, one major benefit of today's crop of electric vans is their innate suitability for 'last-mile' delivery – largely the sort that courier services and small businesses do most of. Here, outright range is not as important as reliability, low running costs and Congestion Charge exemption – all of which electric vehicles can provide.

Electric vans don't produce any local emissions and are near-silent, so the benefits for multi-drop use are clear: no diesel clatter, no diesel fumes and an altogether less intrusive presence when parked at the side of the road. And as with other electric vehicles, there's the benefit of exemption from emissions-based charges like the London Congestion Charge.

As well as saving on C-Charge costs, an electric van could help you save on other everyday costs like fuel and maintenance – fewer moving parts should mean you'll experience fewer mechanical issues, while a full charge of electricity will cost much less than an equivalent tank of diesel. 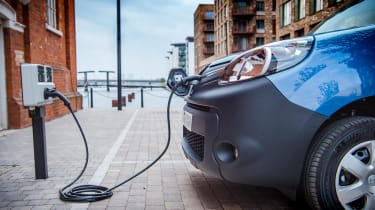 Generally speaking, yes – electric vans use expensive-to-replace components like lithium-ion batteries and, due largely to a shortage of available qualified technicians in independent garages, can be expensive to have fixed. However, it's worth weighing up the other savings on offer – and rest assured that as the industry grows to accommodate an increasing number of electric vehicles on the road, premiums will fall.

How much would it cost to lease an electric van?

Business-specific Contract Hire is usually offered on vans – it's worth considering if such a leasing plan will help you save money. Initial rental costs tend to be cheaper than when buying outright, while concerns like depreciation are taken out of the equation. Tax breaks are another benefit, with half of the VAT paid on the van's finance eligible to be claimed back.

Remember, as with all Contract Hire deals, you don't technically own your van, rather paying a monthly rate and then returning it after the rental period is over.

Remember, too, that the UK Government's Plug-in Van Grant (PiVG) applies to the vast majority of electric vans, chopping £3,000 off the asking price. This is usually applied to the on-the-road price you'll see on manufacturer websites.

You may be surprised to find that some electric vans compare favorably with their diesel counterparts when it comes to cost. As an example, the Renault Kangoo Z.E. starts at around £24,000, or £200 per month on a Contract Hire plan; more or less the same as a comparable diesel-engined dCi 80 model in Business trim.

However, some larger models are likely to cost significantly more than their diesel counterparts. Using Renault as an example again, the Master Z.E. starts at just over £57,000 including the PiVG – but that's considerably more than the £27,000 starting price for a diesel model.

What are the best electric vans to lease?

Deciding which van is best for you will depend largely on payload, size, range and cost. For now, there are very few electric vans actually on sale – although there are many more coming that may well be worth waiting for.

If you're looking for a smaller van, two of our favourites are the Renault Kangoo Z.E. and Nissan e-NV200, both of which borrow technology from those companies' passenger cars. The Kangoo can travel up to 143 miles on a charge, while the e-NV200 boasts up to 187 miles. Even taken with a pinch of salt, these figures should be more than enough for most urban applications.

If you're in need of a larger van, for now there are two main contenders available: the LDV EV80 and Renault Master Z.E. The former is based on an older design but represents a reasonably priced entry point into larger electric vans, while the more modern-feeling Master has recently enjoyed a facelift.

The LDV has a 123bhp electric motor, a 62mph top speed and a 119-mile range, meaning it's still best suited to urban use. Go for the biggest panel-van option and you'll have 11.6 cubic meters and 910kg of payload at your disposal.

The Renault Master, meanwhile, offers a similar approach to a large electric van, with a similarly limited top speed and a 75-mile real-world range. There's more scope for payload, however: the Z.E. can handle up to 1.1 tonnes depending on specification.

There are some electric vans that we reckon will be worth waiting for, however. Volkswagen's e-Transporter has been developed by engineering firm ABT to deliver up to 82 miles of range and will be among the first models to populate the electric mid-sized van market, along with the Citroen e-Dispatch and Mercedes eSprinter.

For a full list of all the electric vans to look out for in 2020 and beyond, click here.