It's not the most exciting, but the Yaris' interior is comfortable, well built and packed with standard equipment 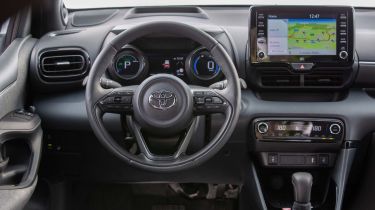 Generally speaking, the Toyota Yaris is a comfortable car to spend time in. However, its ride is a little firmer than some rivals' and doesn't feel quite as sorted as a Ford Fiesta's; there's an occasional hop and jump from the rear suspension and a fidgety feel over broken surfaces. Our test car's 17-inch wheels could have played a part in this, however – we'd stick with Icon or Design trim and their 16-inchers.

Inside, the Yaris hits all the usual Toyota notes of studiness, sound ergonomics and decent-quality materials, but there's a distinct lack of flair that so many of its supermini rivals do well. Still, while a Peugeot 208's interior may have more design appeal, the Toyota's feels built to last and logically laid-out.

The Yaris' dashboard is functionally designed, with a clear, easy-to-read instrument binnacle and properly thought-out heating controls within easy reach. A new and improved infotainment screen sits front-and-centre and is far superior to that of the old car.

If you already have experience with the current crop of Toyota models you'll notice plenty of carried-over switches, toggles and buttons, but this is no bad thing. You can expect everything in your Yaris to still be working years from now.

Standard equipment on the entry-level Icon will be comprehensive enough for most buyers: 16-inch alloy wheels, a  leather steering wheel and automatic headlights, wipers and air-conditioning all feature, along with a 4.2-inch TFT display and the new eight-inch Toyota Touch 2 infotainment system, with steering-wheel-mounted music and voice-recognition controls.

Higher-spec cars can be had with a JBL eight-speaker sound system (up from four speakers), two-zone climate control and height-adjustable front seats among other features, while cosmetic options include red, purple or chrome side sills, mud flaps and chrome front and rear bumper garnishes, many of which are bundled into cosmetic packs. A reversing camera is standard across the range but parking sensors are only offered as an option from the Dynamic model and up. 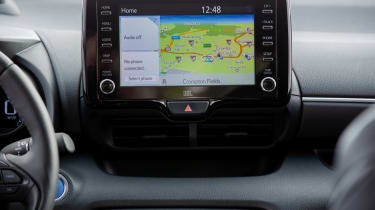 While the old Yaris' in-car technology was woefully behind the times even when it was new, this model gives a better account of itself, with full Android Auto and Apple CarPlay smartphone integration included from the off. The Toyota Touch 2 system is easy to use and feels snappy in operation; our test car also featured a head-up display, but elsewhere the dashboard is less high-tech than what you get in the Volkswagen Polo.