The Model 3 is the fastest charging car on sale until the Porsche Taycan arrives, and delivers a similar real-world range to a used Model S 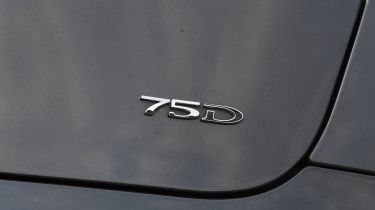 The Tesla Model 3 is the first Tesla to come with a CCS port (the standard European socket type for public rapid chargers) and its 200kWh maximum charging speed is fastest of any Tesla – or indeed any car until the Porsche Taycan arrives.

You have to buy a converter at the cost of £400 to be able to plug the S into those same chargers (and you can also get a converter for CHAdeMO sockets, although of course both cars have access to the Tesla Supercharger network, too).

Real-world range is remarkably close. The Model S was achieving 243 miles maximum range when it was brand new, and with 25,000 miles on the clock it’s now managing 230 miles – the same distance as we achieved in varied everyday use of the Model 3 Standard Range Plus.

Let’s address the Model S first, since uncertainty around battery performance of used electric cars remains a concern for many. Let’s put that to bed straight away: Our two-year-old Model S has 25,000 miles on it, and will cover 230 miles with ease today as opposed to the 243 miles it managed when new. That suggests you can expect the Model S to lose around 50 miles in 100,000 miles of normal use, with occasional rapid charging and mostly home charging, and good battery maintenance.

Interestingly, the Model 3 Standard Range Plus manages much the same 230-mile distance in our test over the same roads, although that range comes from a smaller 50kWh battery as opposed to the 75kWh pack in the Model S. Basically, you’re using less electricity (and money) to cover the same distance in the Model 3, although nobody in their right mind will quibble with the Model S’ running costs (more of that further down the page) given the performance and size advantage it offers.

Put simply, working a range of 230 miles in warmer months is realistic for both of these cars. Cold weather and/or long motorway journeys will see them dip to more like 200 miles in between charges, but they're remarkably close in terms of the range on offer.

The Tesla Model 3 comes with a CCS port, which is the standard European socket type for public rapid chargers and means that you can use third-party stations. You have to buy a converter at a cost of £400 to be able to plug the S into those same chargers. Of course, both cars have access to the Tesla Supercharger network, which is transformative when it comes to ease of charging if you do lots of motorway miles on main artery roads in the UK.

However, with providers such as Ionity now rolling out ultra-rapid chargers across the UK, the Model 3 has the edge, since it can charge at speeds of up to 200kW at these (still-rare) chargers, while the Model S tops up at a maximum rate of 120kW.

Find a rapid charger that can support the 200kWh charging speed and you’ll add 100 miles of range to the Model 3 in under 10 minutes, while the Model S will gain the same range in more like 20 minutes. One of the 50kW chargers that are the most common type at UK motorway services will do the same 100-mile top-up in around 30 minutes minutes for both cars.

Most owners will charge them up at home and a standard 7kW wallbox will deliver a full battery for the Model 3 in 8.5 hours, or 11 hours for the Model S. Plug into a normal three-pin domestic socket at home and you’re looking at 24 hours or more for a full charge. You're eligible for the government grant on a home wallbox whether you’re buying a used or new electric car. 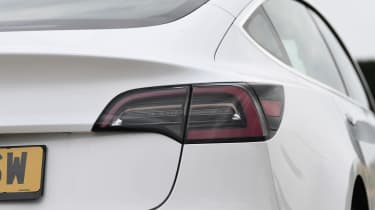 What are the standard cables, and are they easy to store?

Both Teslas come with a cable that has switchable plugs to allow charging from a standard three-pin domestic socket, a Type 2 charger (which includes most fast chargers and home wallboxes), and an industrial three-pin socket typically found on campsites.

The front storage space in the nose of each car is great for cable storage, or there’s underfloor storage in the main boot area that’s also ideal. Don’t worry about cables for rapid CCS charging or the Tesla Superchargers. All rapid-charging stations come with the cables fixed to the charging unit itself, so you simply park up, grab the plug hanging off the charging point and plug it into your car.

Both cars have the ports hidden neatly with the passenger-side rear light cluster, and conveniently the official Tesla cable has a remote release function, or you can just press it to open the flap. Which is good, as it saves faffing about with the mobile app or on the touchscreens, although you can use both of those means to open the charging port on either the S or the 3.

Based on an average domestic electric utility cost of 14p/kWh, the Model 3 will cost £7 to fully charge at home, while the Model S will cost £10.50. Both cars are easy to set up with timed charging, making it simple to take advantage of an off-peak or dedicated electric-car tariff, which could see these costs halved.

Public fast charging is more expensive. The Tesla Supercharger network costs 24p/kWh, so a charge from 20-80% will cost £12 for the Model 3 and £18 for the Model S. Confusingly, Model S’ registered before January 2017 get free use of supercharging, and those registered in the months after that get around 1,000 miles of free use, while recent cars don’t get any free use of the supercharger network.

Every Tesla has an online account registered to it that the previous owner or dealer should give you access to so that you can confirm what level of Supercharger access the car has. Some other public rapid chargers will cost up to 30p/kWh, and also often have a registration fee or monthly fee on top.