The Model 3 has nothing on the Model S for space and practicality, and many will prefer the more conventional dials of the S as well 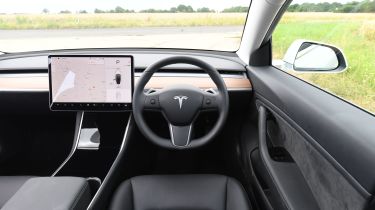 The Model 3 takes some getting used to. Once you’ve slid into the drivers seat – a doddle once you’ve made your phone the car key – you’re faced with the most minimalist dashboard out there. There’s nothing apart from a landscape-mounted 15-inch touchscreen that functions as everything from the speedometer to the glovebox release and door-mirror adjustment.

It's quite odd at first, but with some time you get used to the layout and where you find the key functions in the screen, and you get to appreciate the simplicity of it all. Granted, some of the materials feel a little cheap, notably the fat, plasticky steering wheel, and we’d definitely like a head-up display as standard. But otherwise it’s surprising how quickly you find yourself adjusting to the layout and enjoying the almost Scandinvaian-chic design.

For all that, many will understandably prefer the Model S' slightly more conventional layout. The huge portrait screen is embedded in the dashboard rather than mounted tablet-style as in the Model 3, and you get full digital readouts in the conventional place you expect them behind the steering wheel.

Our Model S had the carbon-fibre interior trim (a £250 option at the time), which is worth every penny and has aged nicely. In fact, the interior of the Model S seems to have stood the test of time very well, and while there’s a distant squeak from somewhere inside, it seems to have weathered the miles with ease.

In terms of practicality, the S has the 3 nailed. It’s a usefully bigger car and that shows in the lavish amount of room four tall adults can enjoy, plus the hatchback boot is way bigger and easier to load large items into. The 3 is particularly tight for headroom in the back seats, and even legroom will be a bit of a squeeze if you’ve got long-legged people up front, while the saloon opening limits access to the boot.

Having said that, while the 3 is not the most practical executive car of its size, it'll be adequate for a small family and the extended glass roof helps to keep the back seats from feeling claustrophobic.

Both of these cars are equipped with just about everything you’d want as standard, including leather upholstery, those touchscreens with navigation and USB inputs, heated seats, dual-zone air-conditioning, keyless entry, LED headlights, glass roofs and more. There are, in fact, very few options you can even add to the Model 3 Standard Range – our test car had none.

Even the metallic white paint is standard, so the only thing you’ll really miss that you get on more expensive Model 3 models is the satellite-view navigation, upgraded audio and music streaming services. 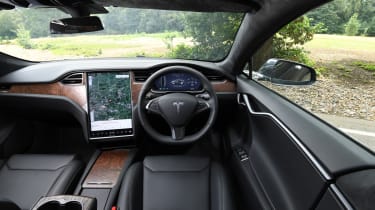 The Model S 75D was also very well equipped when new, and similarly it’s really the cosmetic options that you could get carried away with, or quirky extras like the rear-facing seats mounted in the boot. Suffice to say, with adaptive cruise control, keyless entry, heated leather seats and more included, it’s mainly the enhanced Autopilot function that you want to look out for if you want the car to do the hard work on the motorway.

Tesla doesn’t offer Apple CarPlay or Android Auto in its cars, which is something of a shame since it means you can't use your favoured phone navigation app. However, the way phones integrate with Tesla’s system is impressively intuitive in both the Model S and Model 3, making it easy to find playlists or make a call despite the lack of the apps that many of us favour these days.

The graphics and response times on both screens are great, and both get Tesla’s over-the-air updates, so that even a used car can have a current, feature-rich interface.

Great. We paired a phone with the Model 3 to try out the phone-for-a-key feature and found it really easy and quick to set up. On top of that, the app is easy to navigate, generally reliable in its connection to the car, and gives you all the features you’d want, including live updates on charging status and the ability to pre-set the car’s climate control.

It sounds like a small factor, but in reality the Tesla app is one of those things that makes the ownership experience such a smug one. You’ll use it once and then wonder how you ever lived without it forever after.