The 508 makes most sense as a a company car, while private buyers will be better off with the Superb 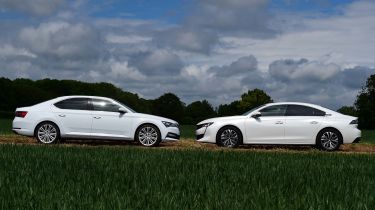 Realistically, most of those considering either of these plug-in hybrid models will be company-car users, so it's good news that both are subject to a low 10% Benefit-in-Kind (BiK) tax rate. As tested, the Peugeot has a slightly lower list price and so offers lower payments – £698 a year for lower-rate earners or £1,396 for higher-rate earners, versus the £721 or £1,441 for the Skoda.

Annual road tax is the same for both cars, at £140 per year. If you choose a higher spec that pushes the asking price over the £40,000 threshold, however, there's an extra £325 to pay each year in years two through six of ownership.

If you're a private buyer, you may be interested to learn that the Skoda makes more sense from a depreciation point of view. Our experts predict it'll retain 46.34% of its value after three years and 36,000 miles, with the Peugeot set to retain 43.78% over the same period. The Peugeot has the benefit of being a few thousand pounds cheaper overall in the first instance, however.

Things tip in Skoda's favour when it comes to insurance; sitting in group 26 versus the 508's group 31, the Superb should mean cheaper premiums. The 508 is covered by a two-year/unlimited-mileage warranty with an optional third year as long as the 60,000-mile limit isn't exceeded, while Skoda offers similar three-year coverage, but with a 60,000-mile limit. Both cars get an eight-year/100,000-mile battery warranty.