The Porsche Taycan should be reasonably cheap to run, once you’ve got past the eye-watering purchase price 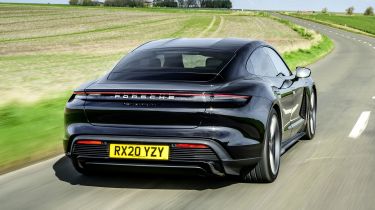 Running costs for the Porsche Taycan will be very reasonable for a car of this price thanks to electricity being cheaper than petrol, although that initial asking price makes the overall cost of ownership very high indeed.

Charge the Taycan at home using a wallbox and full top-up will cost around £12, based on average electricity prices in the UK. This will fall significantly if you plug in overnight and take advantage of off-peak tariffs.

With an official range from around 250 to 280 miles, you’re looking at fuel costs of some 5p per mile, which pales into insignificance compared to the petrol costs for supercars and supersaloons that achieve the same performance. Charging at public rapid chargers is much more expensive, and can even be equivalent to fuelling a petrol car at some 35mpg, but most Taycan owners will do the vast majority of their routine charging at home or the office.

For the 2020/21 financial year, electric cars attract no Benefit-in-Kind company-car tax. However, you’ll need a remarkably generous employer to cover the lease or purchase costs involved in running a Taycan on a company fleet, which is why this will remain primarily a privately owned car.

The Porsche Taycan falls into the highest insurance group – 50 – regardless of which model you choose. This means it'll be very expensive to cover, even if you’ve got a long history of safe driving with no claims, but that’s just the same for any other car with comparable performance and value. That said, the premiums aren’t going to put off anyone capable of forking out six figures for the car in the first place.

The Porsche Taycan is sold with a three-year/unlimited-mileage warranty as standard, while the battery is covered by a separate, eight-year/100,000-mile warranty.

The main service for the Porsche Taycan is due every two years or 20,000 miles, which is a much more generous service interval than you’ll enjoy on a petrol-powered Porsche Panamera, Bentley Continental GT or the like.