The Porsche Panamera is a large, fast and luxurious five-door hatchback, originally designed to rival the best luxury cars from Mercedes, BMW and Audi, as well as higher-end manufacturers like Bentley.

The first-generation car was heralded a huge success, and its successor arrived in 2017. It has been designed as a comfortable way for four occupants and their luggage to travel long distances at speed, as well as being an enjoyably sporty car for drivers on a variety of roads.

The Panamera was one of the first Porsches to incorporate hybrid technology, and since the company's 2018 decision to stop using diesel engines, the Panamera and the Cayenne hybrid SUV have been the models of choice for those looking for maximum efficiency from their Porsche.

Today, there are a number of Panamera models to pick from, with most being purely petrol-powered – but it's the Panamera 4S E-Hybrid we're most interested in. Following a mid-2020 range update and facelift, it's the only plug-in hybrid model in the range, at least for now; Porsche has retired the ballistic Turbo S E-Hybrid, but it may well return in the future.

The Panamera 4S E-Hybrid is powered by a 2.9-litre V6 petrol engine and electric motor, which together produce a healthy 552bhp and 750Nm of torque. Power is fed to all four wheels using Porsche's excellent eight-speed dual-clutch automatic gearbox. Performance is befitting of the Porsche brand: 0-62mph in 3.7 seconds and a 180mph top speed mean this is a seriously quick luxury car.

The plug-in hybrid drivetrain also means that this supercar-like performance is balanced out by very respectable CO2 emissions and economy figures. You're unlikely to get close to the claimed maximum of just over 128mpg if you use all the car's performance all of the time, but with a charged battery and careful driving, you'll achieve far better fuel economy than in an equivalent non-electrified Panamera. Similarly, CO2 figures as low as 51g/km mean the Panamera 4S E-Hybrid will make some sense as a company car. 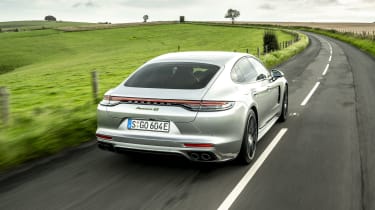 There's plenty of showroom appeal, just as you'd expect from any other Porsche. The Panamera's mid-2020 facelift brought its styling in line with the firm's SUV range, with a bold rear light bar and refined LED headlights; inside, the Panamera remains one of the most luxurious and well built cars in its class, with swathes of leather and endless scope for putting your own stamp on things.

A huge part of the Panamera's appeal for many will be its great blend of performance and efficiency, paired with plenty of practicality. There's room in the back for adults to stretch out, while the 403-litre boot is usable, if a little down on volume versus its purely petrol siblings.

Throw in a keen chassis that does its best to hide the car's considerable mass, a very useful 33-mile electric range and a smooth, well integrated hybrid system and the Panamera 4S E-Hybrid makes a strong case for itself. It's a big car and feels it on UK roads, and for us the suspension could be a little more refined in its operation on the roughest of surfaces – but if you have the funds required, the latest Panamera is well worth a look.

For a more detailed look at the Porsche Panamera hybrid, read on for the rest of our in-depth review... 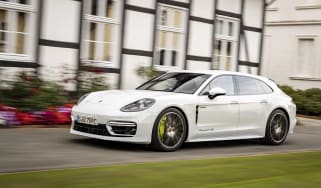 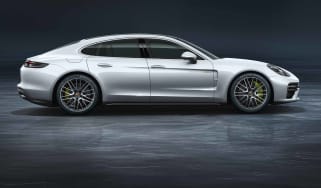