The Porsche Taycan offers decent practicality, although boot space is adequate rather than generous 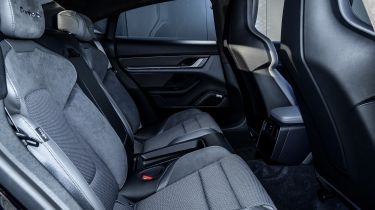 The Porsche Taycan is fast and exclusive, but that doesn’t mean it shouldn't also be practical. While it’s not as good as full saloon rivals like the Tesla Model S, in the scheme of four-door coupe GTs, it’s very good.

Inside, there are various storage compartments for loose, everyday items. There’s a glovebox, of course, and the central section between the driver and front passenger seat houses two large receptacles with adjustable nodes to hold different-sized drinks.

The armrest opens to reveal a storage area behind these, and there’s another space for bulkier objects located underneath the lower, central touchscreen. There’s storage space in the door bins too, although these aren’t huge.

The Taycan can be configured with two, four or five seats. In four-seat form, there’s a tray in the base of the bench, while the back folds down to provide rear passengers with an armrest. With the five-seat set-up, there really isn’t a lot of legroom for the central passenger.

Outer rear passengers will have adequate legroom, but it’s not really possible to tuck your feet under the front seats – something which may affect taller passengers on long journeys. Getting in and out of the rear can also be a challenge because of the car’s sloping roofline. 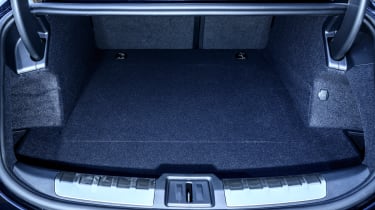 The Porsche Taycan’s boot is deceptively large given the official figure of 366 litres, although it’s still less than half the capacity you get in this car’s main rival, the Tesla Model S.

Yes, there’s a ‘frunk’ with a further 81 litres of storage space under the bonnet, but again this falls short of the 150-litre capacity of the same compartment in the Model S. If you’ve got a lot of luggage to carry, there’s no getting away from the fact that the Tesla is better equipped than the Porsche in this department.

The boot floor in the Taycan is flat and squared-off, which helps it make the most of its overall capacity. However, it’s not quite as practical as the Panamera hybrid, which has a hatchback tailgate that makes life easier when loading bulkier items.

Given that the Taycan treads a line much closer to a four-door sports car rather than a saloon, it delivers very decent space and practicality. If you do want even more roominess, check out the forthcoming Taycan Cross Turismo.