Occupying the more luxurious end of the 'van-with-windows' market, the Mercedes EQV takes the V-Class and adds silent and refined electric power 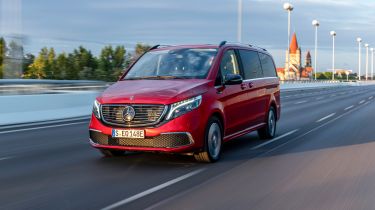 The EQV 300 doesn't change any of the fundamental characteristics that have made the V-Class so popular. There are no overt electrically themed styling changes outside, and perhaps most importantly, it's as comfortable and spacious inside as before.

There are three trim levels: Sport, Sport Premium and Sport Premium Plus; the first of these can be configured in a 2-2-3 or 2-3-2 seating formation, while Premium and Premium Plus cars get a 2-2-3 layout with a fold-out table system for middle-row passengers. Leather upholstery is standard on all models, as are heated front seats, automatic climate control and ebony wood-effect trim, so the overall effect is more 'executive express' than school-run bus.

Gone is the usual diesel engine you'd find in most V-Class models, replaced by a 201bhp electric motor and sizeable 90kWh battery. The result is acceleration that feels far more eager than the official 0-62mph time would suggest, along with a range of up to 213 miles.

On the move, the EQV feels softly sprung and quite bouncy, especially when unloaded. We've yet to try a top-spec car with its full air suspension setup, but we'd wager that it's the model to go for if outright ride quality is important. The standard suspension arrangement leaves the EQV feeling a little loose in the body-control department, while light steering doesn't exactly inspire confidence. 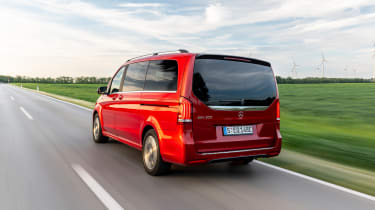 Still, this car is less about dynamics and more about relaxing travel. Refinement is markedly improved over combustion-engined V-Class models; the EQV glides around in serene silence both at low speeds around town and on the motorway. It's a relaxing long-distance car, too, while the impressive 110kW DC charging capacity means you can make swift top-ups on such trips: a 10-80% charge from a compatible public rapid charger will take just 45 minutes.

Maximum AC charging speed is 11kW, but Mercedes doesn't quote a charging speed for this level; instead, if you have a more conventional 3.6kW wallbox at home, you'll need around 10 hours to top up that big battery.

The EQV is based on a longer-wheelbase version of the Vito van, so some may have to get used to the feeling of driving a vehicle that's just over 5.3 metres long and 2.2 metres wide including mirrors. A 360-degree parking camera is a godsend in tighter spots like multi-storey car parks, but only comes as standard on the Sport Premium and Premium Plus models. All get Mercedes' PARKTRONIC parking sensors, however, so there's a basic level of assistance.

All EQV models also get a great level of standard equipment – much as you'd expect from such an expensive vehicle. Highlights include LED headlights, 12V outlets for rear-seat passengers and in the boot, ambient lighting, automatic wipers, cruise control, lane-keeping assistance, traffic-sign recognition and a 10.25-inch infotainment screen as found on other Mercedes cars. However, one small point is that Apple CarPlay and Android Auto are only supported on Sport Premium cars and upwards.

Your choices for a large, seven-seat MPV with pure-electric power are very slim – for now, the EQV is just about the only viable option. It's very expensive for private buyers, so the EQV makes most sense as a company car or a zero-emissions alternative for executive transport firms. 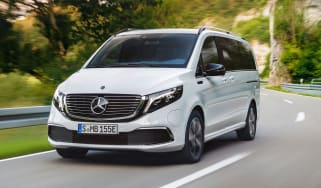 The fully electric Mercedes EQV 300 people carrier is now on sale in the UK, with prices starting from £70,665
Skip to ContentSkip to Footer