Peugeot’s e-Traveller electric minibus is open for reservations ahead of 2021 on-sale date; will start from £37,430 in the UK 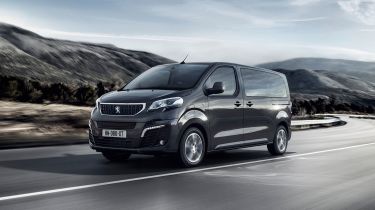 Peugeot is now accepting reservations for its electric minibus, the e-Traveller, ahead of its 2021 arrival in showrooms. A passenger version of the e-Expert panel van, it's available in a choice of seating arrangements and wheelbases. Reservations can be made with a fully refundable £250 deposit.

Prices start at £37,430 for the standard-length model in Active trim; standard equipment includes 17-inch wheels, rear parking sensors and cruise control, along with Apple CarPlay and Android Auto functionality. The e-Traveller is also available in Allure trim, which adds front parking sensors and a rear-view camera, keyless entry, sat-nav and a head-up display.

Built on the PSA Group’s familiar EMP2 platform – as found under the Citroen C5 Aircross and Peugeot 3008 – the e-Traveller is powered by a 100kW (134bhp) electric motor that’s fed by a 50kWh battery under the floor. Peugeot claims a driving range of 143 miles.

Two on-board chargers are offered: a standard 7.4kW unit and an optional 11kW one. Peugeot says a charge from a domestic socket will take 31 hours, while a 7.4kW wallbox will cut that to seven hours and 30 minutes. The 11kW charger can manage a five-hour charge from a wallbox, while rapid-charging capability means connecting to a 100kW charger will get you to 80% in just 30 minutes.

On the move, the e-Traveller can be operated in one of three modes. Eco cuts power to 80bhp in the name of maximised range, Normal operates at 107bhp as a compromise between range and performance.

Power allows access to the full 134bhp and 260Nm of torque, for maximum hill-climbing and overtaking capability. Two braking modes are also included – Moderate and Emphasised – with the latter increasing the ‘engine braking’ effect when not pressing the accelerator. 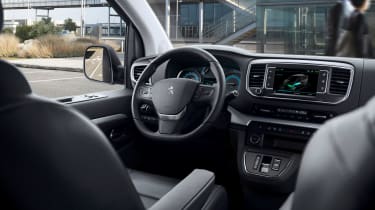 To the untrained eye, the e-Traveller looks much like the standard car, but there are some detail changes inside and out. The electric model gets its own design of 'lion' badges and grille and, perhaps most tellingly, a charging-port cover on the front left wing.

Inside, most changes are related directly to the car’s electric powertrain: a head-up display and revised graphics on the central infotainment screen allow for monitoring of charge, range and other parameters, while Peugeot’s e-Toggle replaces the conventional gear selector. There are separate buttons to select driving and braking modes, too. An electric parking brake is standard, freeing up interior space.

The e-Traveller can be had in Standard and Long bodystyles, measuring 4.95 and 5.3 metres long respectively. Depending on size, the car can carry up to eight people, paired with a 1,500-litre boot with all seats in place – or with all seats removed, a massive 4,900 litres.