The Lexus CT 200h just about manages to remain relevant in an increasingly crowded market, but newer rivals are more efficient 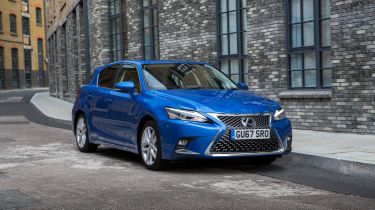 Lexus practically invented the luxury compact hybrid class when it unveiled the CT 200h at the 2010 Geneva Motor Show. It went on sale in 2011 and has gone on to amass sales of over 300,000 globally, including 75,000 in Europe. Rivals include the Toyota Prius and Hyundai Ioniq hybrids, as well as the plug-in hybrid VW Golf GTE. The CT stood in a field of one in 2011, but the market has caught up and despite a programme of continuous development, the Lexus is beginning to show its age.

The CT 200h is based on the previous-generation Toyota Prius and shares its underpinnings with the old Toyota Auris. Power is sourced from a 1.8-litre four-cylinder petrol engine paired with an electric motor to deliver a total output of 134bhp. It’ll hit 62mph from rest in 10.3 seconds before reaching a top speed of 112mph.

The CT 200h is a full hybrid (or what Toyota/Lexus describes as a ‘self-charging hybrid’) with the electric motor designed to improve fuel economy, reduce CO2 emissions and deliver a mile or so of zero-emissions driving. Unlike its plug-in hybrid rivals, there are no charging cables and little chance of completing a commute on electric power.

The CT is priced largely in line with conventional premium hatchback rivals and the Prius. It is, however, more expensive than the Ioniq Hybrid, which doesn't offer the same level of quality and specification as the CT 200h, but has better overall packaging and efficiency.

Aside from its hybrid powertrain, the other key selling point is the CT’s excellent interior. So many years after launch, it retains a quality feel, with a level of fit and finish to rival anything else in this class. The dashboard is showing its age and the infotainment system feels woefully outdated, but the interior certainly feels good. 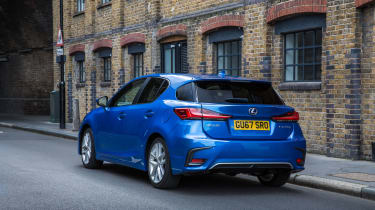 In the back, rear-seat space is compromised by the battery pack under the floor, while boot space is merely adequate for this size of car. Rivals offer substantially more luggage capacity when you fold the rear seats down, but at least the boot floor is flush with the lip.

The CT 200h was never a class leader dynamically and has been further outstripped in this area since launch. The ride quality is poor, performance is lethargic and the steering offers nothing in the way of feedback. Push the CT too hard and the CVT transmission responds with lots of noise but little action. In its favour is an incredibly quiet and refined ride at town speeds and plenty of composure on the motorway.

Overall, the CT 200h feels like an ageing product, but just about manages to remain relevant thanks to its low CO2 emissions, quality interior and excellent reliability.

Read on for the rest of our in-depth Lexus CT 200h review. 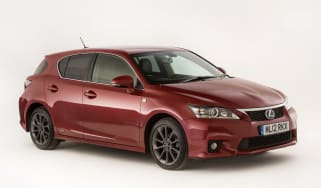 Our complete guide to buying a used Lexus CT 200h hybrid, manufactured from 2011 to present
Lexus CT 200h updated for 2019 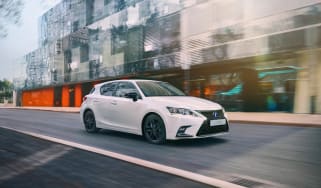