Our complete guide to buying a used Lexus CT 200h hybrid, manufactured from 2011 to present 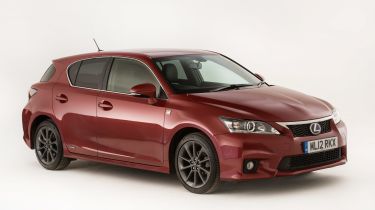 Lexus introduced the CT 200h back in 2011, billing it as "the world's first full hybrid luxury compact car." It's proven to be a remarkably long-lasting model since then, and has outlasted its plug-in hybrid rivals, the Volkswagen Golf GTE and Audi A3 e-tron, both of which went off sale during 2018.

Low running costs, combined with a luxurious interior and generous standard equipment, have always been the CT's main trump cards. It boasts very comfortable seat and a classy design that has aged well in the years since its launch – but it's no longer at the technological cutting edge.

The CT 200h was a popular company-car choice, so there are plenty to choose from if you're buying secondhand. And depending on when it was first registered, you'll be paying little to no road tax (VED) as a private owner. Fuel economy is strong, too: 50mpg is easily achievable, although Lexus' near-70mpg claimed figure is trickier to achieve.

Under the CT 200h's upmarket bodywork sits the running gear from the more humble Toyota Prius Mk3. That's both a good a bad thing: the Prius is one of the most reliable and efficient cars you can buy, but is far from the last word in driver enjoyment and handling prowess.

It's not surprising, then, that the Lexus' driving experience doesn’t appeal as much as its running costs. Attributes include lifeless steering, a firm ride and a CVT automatic gearbox that allows the engine revs to rise as soon as you apply a moderate prod of the accelerator.

Not that buyers seem to mind – the CT is a perennial high-achiever in our sister title Auto Express' Driver Power customer satisfaction survey. Owners find the car itself reliable, and Lexus dealers are highly praised for their customer service. It’s certainly an easy car to own and can make a great used buy. 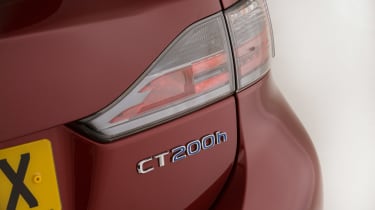 The Lexus CT 200h appeared in UK showrooms in February 2011, and although it remains fundamentally the same car today, it underwent revisions in 2014 and again in 2017. All models have a 1.8-litre petrol engine backed up by an electric motor to produce 134bhp. Power is sent to the front wheels through a CVT automatic gearbox.

The early CT offered tax-friendly CO2 emissions of just 94g/km and was available in SE-I, SE-L and SE-L Premier trims. These were joined by the sportier F-Sport trim, with even firmer suspension, in early 2012. This was followed a year later by a high-spec Advance trim and an entry-level S model. Although rather at odds with Lexus’ upmarket position, the rather spartan S registered CO2 emissions of just 87g/km. With the introduction of these new trims, the rest of the range was renamed SE, Luxury and Premier.

The CT was facelifted in March 2014, with tweaked styling, extra equipment, an improved ride and importantly, lower prices and reduced CO2 emissions for the S trim – now just 82g/km. In 2015, a Sport trim and the high-spec Advance Plus model were introduced.

In 2017, the CT 200h gained Lexus new ‘spindle’ front grille, giving it a more contemporary look. Equipment levels were simplified and a Sport Plus option, plus a new Executive Edition were introduced. 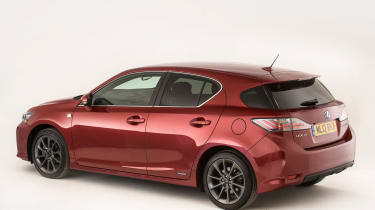 All Lexus CT 200h models have the same engine, electric motors and driving experience. Your choice will largely come down to your budget, the equipment you need and whether you want a slightly sportier look.

The S trim introduced in 2012 had smaller wheels and a larger rear spoiler in the pursuit of further reduced running costs, although it lacked visual punch. The Premier model replaced SE-L Premier, and added a DAB radio and electric passenger seat. The F-Sport featured some racier styling, keyless entry and firmer suspension, while the SE replaced the SE-L and gained folding door mirrors.

Advance featured sat-nav, automatic headlights and wipers and cruise control, and was offered as the value-for-money version of the range. 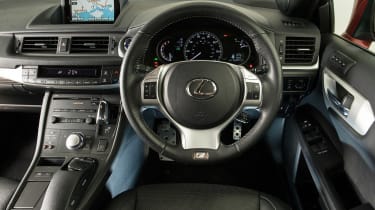 All these years after the Lexus CT 200h first went on sale, it still has few rivals. The closest is the Audi A3 Sportback e-tron – another family-size hatchback with five doors and a posh badge on the nose, although it's a plug-in hybrid rather than a regular self-charging hybrid. It’s the same story with the Audi’s sister model, the Volkswagen Golf GTE.

Would-be CT buyers should also take a look at the Toyota Prius, as they share mechanicals, even if the Prius lacks the Lexus’ upmarket appeal. The Citroen DS5 hybrid represents a quirky and rare alternative to all these models.

Fuel economy: Depending on the model you choose, official fuel economy will vary slightly. Lexus claims nearly 70mpg, but expect around 50-55mpg in the real world.

Rattles: Interior noise can be an issue – but not for the reasons you might expect. With the exception of engine noise under heavy acceleration, the interior of the CT 200h is very quiet, so the smallest rattle can make itself heard.

Infotainment: Go for a model with the impressive Mark Levinson stereo, as it sounds far better than the standard setup. The quirky flat joystick arrangement that controls the stereo takes some getting used to, and requires precision right-handed drivers might struggle with.

Spare wheel: The boot is small, so Lexus equips most models with a tyre compressor and tyre-repair foam. An aftermarket space-saver spare wheel could make a wise investment.

Interior space: The CT 200h’s upright stance means interior space is plentiful, and despite sitting over the car’s hybrid tech, the boot is a fairly roomy 375 litres, increasing to 985 litres when the seats are folded.

Comfort: The seats are among the comfiest you’ll find in this size of car anywhere, but the firm suspension means the CT crashes over larger bumps. F Sport is the firmest of the bunch. 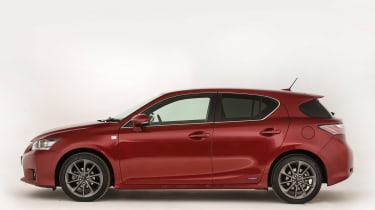 The Lexus CT's service interval is every 12 months or 10,000 miles, whichever is sooner. That’s pretty much the average for a car like this and is, unsurprisingly, the same as for a Mk3 Toyota Prius.

Services alternate between Intermediate and Full. The former, which is little more than an oil and filter change, costs around £200, which makes the £350-odd Full look well priced by comparison.

A more extensive service is due at 60,000 miles, and costs around £450, but the biggie comes at 100,000 miles, with a bill of around £550. Fortunately, there’s no timing belt to worry about changing, and while the brake fluid and coolant need changing every two and ten years respectively, the cost is included in the service bill.

Remarkably, the Lexus CT 200h hasn’t been recalled once since it went on sale, which speaks volumes about the quality of the car’s engineering.

The Lexus CT 200h has put in stellar performances in our Driver Power owner satisfaction survey year after year. In 2018, it was rated as the ninth most reliable new car on the market and the year before it was rated the second most reliable used family car.

That should come as little surprise when you learn that Lexus has the most satisfied owners of any car brand, with drivers praising its cars for interior and comfort, reliability, safety and running costs – the CT’s strongest suits. 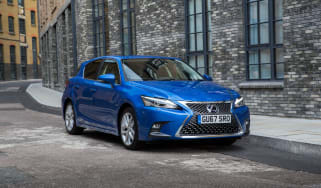