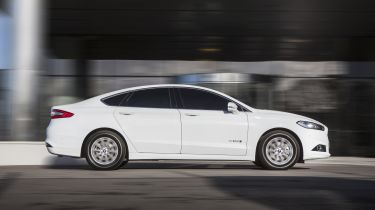 The Mondeo Hybrid has a 2.0-litre, non-turbocharged petrol engine and an electric motor, which combine to produce 186bhp.

Sadly, it rarely feels like it has that amount of power. And to make matters worse, whereas other automatic Mondeos have a more conventional dual-clutch automatic gearbox, the hybrid uses a continuously variable transmission (CVT).

The electric motor can power the car at up to 85mph, as long as you’re gentle with the accelerator pedal, and even when the engine cuts in, it does so almost imperceptibly.

The trouble comes when you attempt anything more than moderate acceleration, as the CVT gearbox is slow to respond, feels like it saps power, and worse, leaves the engine droning in the background. The problem is made more pronounced because the Mondeo is otherwise pretty smooth and quiet to drive, so this additional noise really stands out.

The latest Mondeo also lacks much of the driver engagement that set previous Mondeos apart. The Lexus IS is better in this regard, although the Mondeo’s tall tyres (on 17-inch wheels, at least) allow for a smoother ride more akin to a Mercedes.

There’s just one powertrain for the Ford Mondeo Hybrid, combining a 2.0-litre petrol engine with an electric motor to produce a combined total of 186bhp. On paper, that translates to a 0-62mph time of 9.2 seconds, which means its performance is on a par with several other Mondeos, but better than a Toyota Prius.

The trouble is that in everyday use, the car doesn’t feel as quick as that. The CVT gearbox, which is slow to respond, feels like it saps power, and worse, leaves the engine droning in the background. On the other hand, as long as you’re gentle with the accelerator pedal, things are much better. When the engine cuts in, it does so almost imperceptibly.

We enjoy driving the regular Mondeo hatchback, although it feels more grown-up than previous versions of the car. By that, we mean it’s quieter and more comfortable – and, for most part, this Hybrid version is pretty comfortable, too. Arguably, that's welcome in a car that suits a more relaxed driving style – as this one does. And, yes, if you were faced with a long motorway trip, the Mondeo Hybrid would do the job perfectly.

The trouble is, we‘ve come to expect a wider range of abilities from the Mondeo, and not only are other versions more engaging to drive – they suffer from less body lean, have better body control and more grip – rivals such as the Volkswagen Passat, BMW 3 Series and Mercedes C-Class are all better, too.