The Ford Mondeo Hybrid's economy and emissions are nothing special, but it does make some sense as a company car 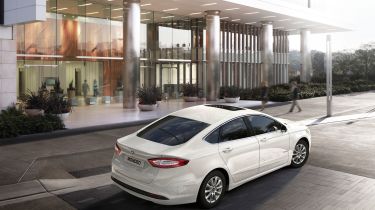 There was a time when a family car with CO2 emissions of around 130g/km and fuel economy of around 50mpg would be very impressive – but not now. At a time when the Mondeo Hybrid's rivals are mostly plug-in hybrids and have much lower emissions, the Ford doesn’t look that special.

Admittedly, the hybrid technology does make this one of the best Mondeos for company-car users, but you don’t have to look far to find a similar car from a rival maker that’s even better. And, if you’re a private buyer looking for an economical Mondeo, this isn’t that much more frugal in everyday use than a diesel.

The Mondeo Hybrid comes in four trim levels. The Zetec Edition with 17-inch wheels emits the least CO2, at 127g/km, but a Titanium Edition with bigger wheel, as well as the high-spec ST Line and Vignale, emit 131g/km. MPG figures are roughly the same for all variants, hovering around the 50mpg mark in all cases.

That might have been impressive back in the day, but not any more. In fact, if you only take fuel economy into consideration, the Mondeo Hybrid isn’t that much better than a diesel.

Almost every diesel-engined Mondeo returns more than 50mpg under the latest tests. And, given that we only saw 43mpg from a Mondeo Hybrid when we tested it, it’s not hard to see that a diesel could easily return better economy in the real world.

The one advantage the Mondeo Hybrid does have is for company-car users. Thanks to its relatively low CO2 emissions (compared to other Mondeos, anyway) and the fact that it doesn’t incur the diesel surcharge, it can work out cheaper to run.