The Audi Q5 plug-in hybrid will be a joy to live with, and spends a useful amount of time in electric mode even with little battery left 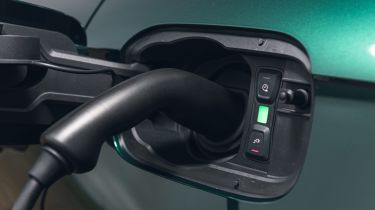 The hybrid Audi Q5’s 26-mile official range is competitive with rivals like the Volvo XC60 T8 Twin Engine, but with upcoming models like the BMW X3 plug-in hybrid offering 31 miles of electric running, that could seem a little disappointing given that this is brand-new technology.

Even so, if you plug in regularly, the Q5 will easily do over 20 miles in electric mode. When that’s done, the 2.0-litre turbocharged engine is more efficient than the Volvo’s and the Q5 is good at harvesting energy from the regenerative braking system and switching into electric mode at slow speeds.

We saw well over 40mpg in a lengthy motorway journey, although the conditions and driving style, as well as the battery charge on offer, can drastically affect the overall economy you see in any plug-in hybrid.

Both Q5 TFSI e models get the same 14.1kWh battery, with an official range of 26 miles. Our test drive suggested that you’ll see around 20 miles if you do a fair bit of motorway driving, so if you stick to around-town stuff then you could even eke that up to 25 miles.

Specifying the larger alloy wheels can reduce that, and cold weather eats up battery range faster in any electric car, so factor in shorter zero-emissions running distance in winter.

The Audi’s 14.1kWh battery will charge up in a couple of hours from a 7kW home wallbox, or a standard three-pin domestic socket will do the job in some six hours. Cables for both Type 2 wallboxes and public charges, as well as for your everyday domestic socket, are included as standard. It’s just a shame there’s no dedicated cable storage – they take up a huge chunk of boot space. The Type 2 socket is located on the rear passenger-side wing of the car, and simply pops open with a push-release to reveal the socket complete with button to turn timed charging on or off, and also a button to release the cable (which will only work if you’ve unlocked the car).

The timed charging parameters are there to allow you to take advantage of off-peak electricity tariffs if you have them, and can be set via the screen in the car or via a phone app. The app also allows you to pre-set the cabin temperature provided the car is plugged in; a common feature on electric cars and particularly great in winter as you can have the car warm up and de-ice itself ready for when you set off.