The Audi Q5 TFSI e is competitively priced and cheap to run if you plug in regularly, but it’s easy to overspend on options and finance is expensive 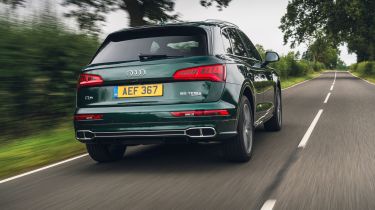 Plug the Q5 TFSI e in regularly and you could run around spending virtually nothing on fuel, while the petrol engine is more efficient than the equivalent in the Volvo XC60 when you do have to use it. Charging the battery at home will cost around £2 on an average domestic electricity tariff, or could be as little as £1 if you use off-peak tariffs.Company-car tax is very cheap, too, with the entry-level 50 TFSI e Black Edition costing £2,061 a year for 40% taxpayers as of April 2020 – cheaper than the XC60 T8. Mind you, the 55 TFSI e engine is more closely matched to the cheapest XC60 T8 on power and equipment and comes in at £2,249 per year for a 40% payer. The purchase price is competitive, too, but it’s too easy to spend big on options with the Audi. Key equipment like keyless entry and adaptive cruise control come as part of expensive packs, so if you want to add those and metallic paint you’re looking at some £4,000 of options before you’ve considered a panoramic glass roof. Finance is a bit pricey, too: a deposit of nearly £8,000 on a 50 TFSI e S line leaves you with payments of £580 over three years.

The Audi Q5 starts at insurance group 40, which is very much in line with what you’ll pay on most high-end SUVs, if not a fraction lower than some rivals. Ratings top out at group 43 for the range-topping Vorsprung Competition variant.

Audi offers a three-year/60,000-mile warranty on the Q5, while the hybrid system's batteries are covered for 100,000 miles or eight years.

The Q5 is clever enough to tell you when it needs servicing, which can vary depending on the sort of driving you do, but standard schedule is for a service every two years or 19,000 miles – a longer interval than you’ll enjoy on most rivals.

The Audi costs nothing to tax in the first year, but it costs £140 a year from then on. Plus, it's subject to a premium surcharge of £325 each year of ownership from years two to six, pushing your annual bill during that time to £465.