The all-new Vauxhall Mokka-e is available to order now; prices start at £30,840 after the plug-in grant

This is the new Vauxhall Mokka-e electric SUV. It's on sale now priced from £30,840 (including the plug-in car grant) and with first customer deliveries expected in April 2021. The Mokka-e is offered alongside the regular petrol and diesel Mokka models and is Vauxhall's equivalent to the DS 3 Crossback E-TENSE and Peugeot e-2008 SUVs.

Built on the same CMP (Common Modular Platform) mechanical underpinnings as the Vauxhall Corsa-e and Peugeot e-208, the Mokka-e is powered by a 100kW electric motor and 50kWh battery. Total claimed range is 201 miles, while an 11kW on-board charger allows for both home wallbox and rapid charging. Top speed is limited to 93mph, although acceleration figures are yet to be announced – a time of around eight seconds is likely.

Three drive modes allow control over the car's electric drivetrain: Normal, Eco and Sport. Charging, Vauxhall claims, will take just 30 minutes to 80% from a 100kW public rapid charger. Vauxhall claims that the new Mokka is up to 120kg lighter than the old car, up to 30% stiffer and so more efficient and more fun for the driver. 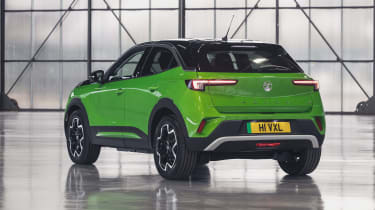 The new Mokka has a slightly longer wheelbase than before, but is 12.5cm shorter; the boot measures in at 350 litres. Its styling, Vauxhall says, heralds a new design direction for the brand – all future models will carry the new 'Vauxhall Visor' front-end treatment, with LED matrix headlights, along with similar design touches to the interior. It's overall look is inspired by the 2018 Vauxhall GT X Experimental concept car.

Inside, the all-new interior features a dashboard that echoes that revised front end. The latest-generation Vauxhall infotainment works across two screens of varying size depending on trim level; Android Auto and Apple CarPlay functionality features, along with real-time information sat-nav and access to VauxhallConnect breakdown assistance and automatic emergency call technology.