The running costs of the Tesla Model S are very low, but the asking price is sky-high 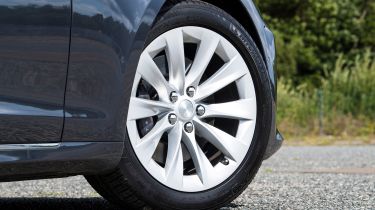 Starting from just under £75,000, even the most basic Tesla Model S isn’t cheap. The Jaguar I-Pace starts from just over £65,000, and while that isn’t what you’d call affordable, it does at least highlight the premium you’re paying for Tesla’s technology.

The good news is that running costs are typically low. A Model S Long Range can be topped up at home for around £12, or even less using cheaper night-time electricity rates. The Tesla Model S is Congestion Charge-exempt in London, which could save you £15 every time you drive through the centre of the UK's capital.

All versions of the Tesla Model S are in insurance group 50 – the highest possible bracket – mainly because of its rapid acceleration and high replacement cost. Unsurprisingly, Model S policies won’t be cheap.

The Tesla Model S comes with a four-year/50,000-mile warranty, while the battery is guaranteed for eight years and an unlimited amount of miles in that time.

Tesla recommends that the Model S be serviced every 12 months or 12,500 miles, whichever comes first. Tesla offers three and four-year maintenance plans for its vehicles, covering consumables such as wiper blades and brake fluid. These plans should help keep costs more transparent and manageable in the long run.

As an electric car, the Tesla Model S emits no tailpipe emissions at all, so there's no road tax (VED) to pay.