The Tesla Model S Long Range delivers more range than any other electric car on sale, and has access to Tesla's Supercharger network 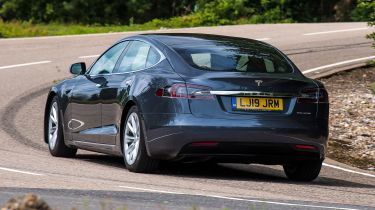 Few electric cars on sale can match the range offered by the Tesla Model S, which comes with a 95kWh battery in Long Range and Performance forms. For comparison, the Jaguar I-Pace boasts a 90kWh battery, while the Audi e-tron also features a 95kWh unit.

The Model S Long Range – with its 95kWh battery – comes with a range figure of 405 miles, although it's likely you'll manage a little less in the real world. The Performance uses the same size battery, but its predicted range is lower due to its additional weight: its official quoted range is 396 miles on a single charge. Compare this to the I-Pace, which is sold with a 90kWh battery and a quoted range of 292 miles.

The Tesla Model S charging time varies depending on how you charge the car. Charging from a normal household socket is extremely slow due to a maximum charging rate of around 2.3kW: this means the better part of two full days would be needed to charge the Long Range and Performance.

Tesla provides an adaptor capable of charging at 7.4kW, which allows you to plug into a dedicated home wallbox (available from companies such as Chargemaster or Pod Point) and most public fast chargers. This will deliver a full charge in about 15 hours for the Long Range and Performance.

The best option is to purchase a Tesla wallbox for your garage or driveway, which delivers power at a rate of 16.5kW – although this does require a three-phase power supply, which not all homes will have. If you can have the Tesla charger fitted, it’ll deliver roughly 50 miles of range per hour, meaning both the Long Range and Performance can be fully charged in six hours.

Tesla’s Supercharger network has points delivering charge at up to 200kW, although public chargers of a similar capacity have started appearing. There are around 300 Tesla Superchargers in the UK, mostly focused on the main motorways. Tesla grants owners 400kWh of free Supercharger use annually: thereafter you’re 20p for every kWh, meaning a full charge of the Long Range would cost £20.

The Tesla Model S battery comes with an eight-year/unlimited-mileage warranty, which is valid even after the car is sold to a new owner. The vehicle itself is covered by a four-year/50,000-mile warranty.