There’s a generous amount of luggage space in the Tesla Model S, plus optional extra seats to consider 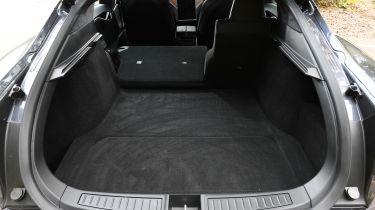 The Tesla Model S is powered by two electric motors; one at the front and another behind the rear seats. As there aren’t as many bulky components normally found in petrol and diesel cars, lots of space has been freed up inside.

The Model S will comfortably seat five, and with five doors, access is easy for all. The boot is very large, and bigger still with the rear seats folded down. There’s also a compartment in the front of the car where the bonnet would traditionally be: this boosts space for luggage even further.

The design of the Model S allows it to have a flat floor, which means legroom is good throughout.

Headroom is more than adequate, but if there’s one area the Model S falls slightly short, its interior storage: there’s a glovebox, cup holders and a central storage compartment in the front, but little else.

With the rear seats up the boot measures 744 litres, and with the rear seats down this rises to 1,645 litres. Don’t forget to factor the front storage compartment into the equation too, which adds another 150 litres to the total.

There isn’t much of a loading lip, which means shopping should be easy to load into the back. The seats don’t fold flat, but given the amount of space on offer, this shouldn’t be too much of an issue.