The Tesla Model S feels spacious and elegant inside, although the finish leaves a little to be desired 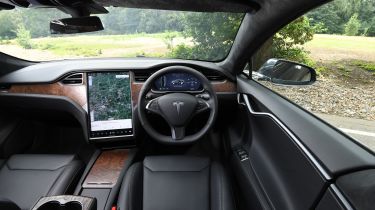 The interior of the Tesla Model S feels clean and uncluttered, and this is largely down to the fact that almost all of the car’s functions are controlled by the 17-inch portrait touchscreen. In fact, the only buttons provided open the glovebox and operate the hazard warning lights, and the absence of items on the dashboard makes the Model S a relaxing place to sit.

The Model S features power-adjustable leather heated seats throughout, and there’s room for five passengers. It's quiet on the road, with the whir of the electric motor only faintly audible over the road and wind noise. It also features ‘smart’ air suspension, which automatically adjusts depending on your speed, and can be programmed to raise itself for your driveway when it detects that you’ve arrived home using its GPS.

The interior centres on a huge 17-inch colour touchscreen on the dashboard, which controls virtually all of the features on the Model S: everything from operating the sunroof to turning on the headlights is done using this screen.

In any car, using a touchscreen can be difficult on the move as you have to take your eyes away from the road to see what you’re pressing. And while this is no different in the Model S, Tesla uses large icons to make navigating the menus as easy and intuitive as possible. The rest of the dashboard is finished in a mixture of zinc and wood, but while the interior is of a reasonable standard, the quality falls short of what you’d expect from such a premium car.

The Model S Long Range comes with a simple black textile finish is standard, although a choice of more sophisticated designs can be specced at an extra cost. On the Performance, only two interior designs can be chosen, however they add no cost to the car and the seats become ventilated for good measure. A set of 19-inch silver wheels is fitted as standard, with 21-inch wheels an extra £1,450.

'Autopilot' – which can steer, accelerate and brake the Model S unaided within its lane – is now a standard feature: it affords a degree of hands-free driving, although it’s important to remember that it’s a driver aid as opposed to a driver replacement.

With Autopilot, the Model S will match the speed of the vehicle in front, keep itself within a lane, change lanes at the flick of an indicator stalk (detecting when it’s safe to move) and even self-park when near a space. It can also be summoned to and from your garage.

Tesla also offers what it calls ‘Full Self-Driving Capability’ for an additional £4,900, which doubles the number of exterior cameras from four to eight and allows you to simply enter a destination before sitting back and letting the car take you there. A word of caution though: Tesla is rolling out this feature depending on local laws, so it’s worth checking with your dealer first before agreeing to pay the extra cash. 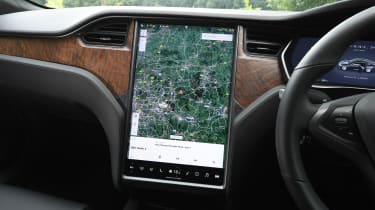 The Tesla Model S uses Google Maps for sat-nav functionality, so it should be instantly familiar and easy to use. Instructions can be followed on the touchscreen, or on the second digital screen set within the instrument cluster. Bluetooth connectivity is available, allowing for smartphone voice control. Apps can be downloaded straight to the car, too, allowing you to access services such as Spotify on the go.