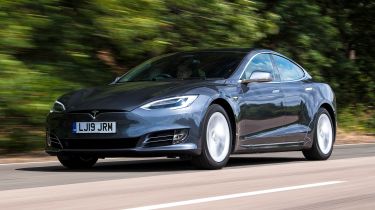 As the Tesla Model S is powered by a dual electric motor, it launches from a standing start like little else on the road. And because it has no gearbox, it’s incredibly smooth to drive. Running on adaptive air-suspension, the ride is for the most part very comfortable, although this is influenced by tyre choice.

You can upgrade from the standard 19-inch alloys to 21-inch wheels for an extra £4,500 or so, however the larger tyres make the ride more fidgety on the UK’s rough roads, and they make more noise than the smaller standard wheels.

Another characteristic of the Model S is its regenerative braking, which recycles energy back into the battery that would otherwise be wasted when slowing down. When driving, this means that Model S slows down very quickly when you take your foot off the accelerator, although it’s something you’ll quickly get used to.

Luckily, you can adjust the level of regenerative braking: less makes the Model S better to drive, while more increases the amount of charge sent back to the battery. A digital display on the screen will show you just how much energy you’re recovering, too.

The Tesla Model S Long Range Plus hits 60mph from rest in 3.7 seconds, while the top speed is 155mph for all models. The Performance gets power boosted to 751bhp, with ‘Ludicrous Mode’ now a standard feature, having previously been an expensive extra. An over-the-air update in April 2020 brought further improvements to performance: 0-60mph takes just 2.3 seconds, while an added 'Cheetah Stance' mode was added to improve standing-start performance.

One of the main benefits of an electric motor is that 100% of the power is delivered instantly, unlike in a petrol or diesel car, which need to build up revs. This means you can blast past others on the motorway: 45-65mph is said to take just 1.2 seconds in the Performance. Compare this to the Jaguar I-Pace, which will do 0-62mph in 4.8 seconds regardless of trim level.

The Tesla Model S’ battery pack is located in the floor of the car, so the centre of gravity is very low. This means the car grips the road well and the body barely leans when cornering. However, the sheer bulk of the Model S (all models are over two tonnes) makes it less than thrilling on a twisty road, and while the steering feels weighty, it won’t give you much feedback. In this department, a Jaguar I-Pace is more enjoyable.

At cruising speed, though, the Model S is relaxing to drive. You’ll hear the whir of the electric motor, plus road noise from the tyres and some wind noise, but it’s still a calmer environment than in a typical petrol or diesel car.