The Tesla Model 3 looks expensive, but it’s cheaper to own than most alternatives after factoring in the performance and fuel costs 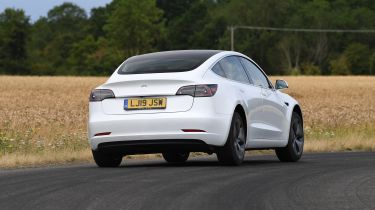 The Tesla Model 3 isn’t a cheap car, but given its performance, desirability and rock-bottom running costs, it’s a compelling financial prospect nonetheless.

After all, while it doesn’t have any direct rivals, something like a BMW 330d or Audi S5 Sportback (both of which are close to the Model 3 Standard Range Plus on performance, executive swagger and price) will cost a similar amount on finance.

But they can't boast Congestion Charge exemption in London, zero road tax and well under half the fuel costs of a diesel car. The Tesla also benefits from Benefit-in-Kind company-car tax exemption.

Insurance groups for the Model 3 are pretty high: 48 for the Standard Range Plus and the highest possible rating of 50 for the Long Range and Performance models, so coverage won't be cheap.

Tesla offers a standard four-year/50,000-mile warranty, which is a bit low on the mileage side but does exceed the three-year warranties offered by rivals from Audi, BMW, Mercedes and Jaguar.

The batteries get an eight-year/100,000-mile warranty and will also be refurbished or replaced by Tesla if they fall below 70% of their as-new performance within that time. That’s unlikely to happen though, given Tesla’s excellent reputation for battery longevity.

Tesla doesn’t state specific servicing intervals – the car will inform you if it needs attention. However, Tesla recommends checking the interior air filter and brake fluid every couple of years.

Thanks to its zero tailpipe emissions, there’s no road tax to pay on the Model 3 – or any other purely electric car for that matter.