The Tesla Model 3 is not the roomiest of cars, particularly for rear passengers, but it is adequate for small families 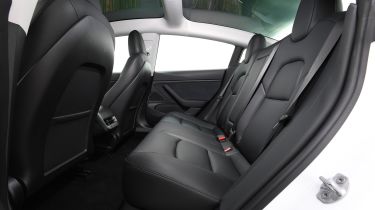 By compact executive-car standards, the Tesla Model 3 is more than good enough. Those up front will have no complaints at all, and there is a good amount of luggage space thanks to dual boots – one smaller one in the nose, and one at the back that’s accessed via a saloon-style bootlid. However, there are plenty of others in the class that offer more space for rear passengers.

Push the flush doorhandles – they don’t pop out as they do on the Model S – and you’ll find that space is pretty similar in the back to that in a BMW 3 Series, which ranks as one of the Model 3’s closest rivals. There’s the added bonus of a flat floor with no transmission hump, but headroom is a little tight for taller adults who could brush the sloped, full-length glass roof that the Model 3 gets as standard.

The Model 3 isn’t a car you buy for its practicality, but it will be fine for the average small family. Those up front are well catered for with two fixed cupholders and some useful space in the centre console, pockets in the doors and a small glovebox, in addition to comfortable and broadly adjustable seats. Those in the back might feel short of foot space, but knee and headroom will be fine for an average-sized adult.

The Model 3 has two boots – one in the nose of the car (often called a ‘frunk’) and one in the back. Access to the rear luggage space is via a letterbox-style saloon opening, although the boot is hinged to lift higher than most saloons so access is actually good by class standards.

The luggage area itself is surprisingly deep, so getting a couple of suitcases or a chunky buggy in will be fine. There’s also underfloor storage that’s ideal for stowing away the charging cables, or the front boot is also a useful place to stick the cables if you’ve got the rear boot full of stuff. The rear seats split and fold, too.