The Honda is the better choice for safety kit and owner satisfaction history; both should be reliable 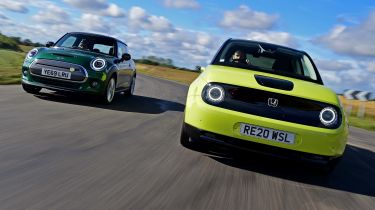 Neither of these electric models has been crash-tested by Euro NCAP, but the MINI disappoints with its lack of standard safety kit. Autonomous emergency braking is included on Level 3 cars like our test model, along with speed-limit and traffic-sign recognition, but that's about it: it does without features like blind-spot monitoring and lane-keeping assistance as found on the Honda e. The Honda gets adaptive cruise control and a self-parking system, too.

Both cars are too new to have featured in the most recent 2020 edition of the Driver Power customer satisfaction survey, but their respective manufacturers fared quite differently. Honda's seventh-place overall finish was attributable to owners' fondness for their cars' practicality, safety features and low running costs, while reliability was also praised.

MINI owners were less impressed, with the brand finishing 26th overall out of the 30 surveyed. Owners criticised practicality, but enjoyed the way their cars drove and looked; a very low average share of owners reported faults, too – just 8%.