While not as agile as a 911, the Porsche Panamera hybrid is satisfying to drive and fearsomely fast 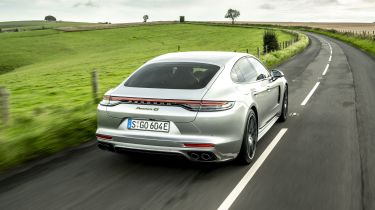 The Panamera 4S E-Hybrid is a fast car by anyone's standards – despite its size and weight, there's sufficient performance to keep up with some of the brand's dedicated sports cars in a straight line.

As this is a Porsche, it comes as no surprise that its drivetrain is very well engineered. The hybrid system works well when left to its own devices in hybrid mode: it pulls away under electric power with a slight whine, only letting the V6 petrol engine join in under harder acceleration.

It's not the most sonorous engine that Porsche has made, but it's effective – overtaking from any speed is effortless. An eight-speed PDK dual-clutch semi-automatic gearbox and four-wheel drive are standard, so shifts are slick and grip is always there when required.

Keen drivers may lament a lack of interaction and playfulness compared to manual-gearbox, rear-wheel-drive offerings, but Porsche would argue that's what its Cayman and 911 models are for. It may not be as engaging as those cars, but the hybrid Panamera does a great job of remaining good to drive despite its 2,200kg weight.

Much as with Porsche's Le Mans racing cars (which share the Panamera's distinctive LED light signature, as it goes), the Panamera's electrification serves to improve performance as much as efficiency. The car's 2.9-litre petrol engine produces 435bhp on its own and is supplemented by a 134bhp electric motor; there's a total of 552bhp on tap, with 750Nm of torque ensuring there's effortless acceleration to be had from any speed.

Acceleration is impressive, with 0-62mph taken care of in just 3.5 seconds with (and 3.7 without) the Sport Chrono pack fitted. If you've got the space, the car can storm on to 185mph. Even in electric mode, performance feels brisk, and usefully the Panamera can travel at speeds of up to 87mph in this fashion. If you want a plug-in hybrid that feels rocket-ship fast, the 4S E-Hybrid has you covered.

Porsche seems incapable of making a car that handles poorly and the hybrid Panamera is no exception to this rule. As a large four-seater with the extra weight of a hybrid system on board, it's unavoidably less nimble than a sports car, but huge power, lots of grip and good body control means it still feels swift and planted on a typical British B-road. The Panamera can feel very large on UK roads, however, and its suspension – while well damped – is quite noisy as it works away to deal with the worst of our tarmac surfaces.

In more sedate driving, the Panamera is equally impressive, with a quiet interior and smooth ride when cruising on the motorway. Transition from electric to petrol power is almost seamless, but we do have one criticism: the regenerative brakes can take some getting used to, making smooth deceleration at low speeds tricky.