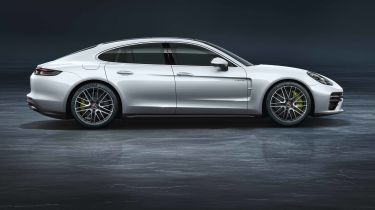 Porsche has revealed a range-wide update of its Panamera supersaloon, including three new plug-in-hybrid versions of the high-performance four-door, known as the 4 E-Hybrid, 4S E-Hybrid and Turbo S E-Hybrid (pictured above).

Porsche describes the drive system in all three of the new Panamera hybrids as "completely new", with the entry-level 4 E-Hybrid making 456bhp from its 2.9-litre turbocharged V6 petrol engine and 134bhp electric motor combination. It has a 0-62mph time of 4.4 seconds and a top speed of 174mph.

This is the most efficient of the three new Panamera hybrids, with official CO2 emissions from 45g/km and fuel economy ranging from 105 to 141mpg. That CO2 figure makes this the only one of the latest hybrid Panamera trio to fall into the 10% band for Benefit-in-Kind (BiK) company-car tax. 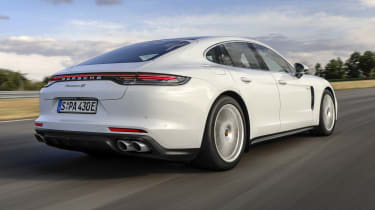 The 4S E-Hybrid version (pictured above) puts out 552bhp in total. This model also uses a 2.9-litre turbocharged V6, but here the petrol engine makes 434bhp, while the electric motor is the same 134bhp unit from the 4 E-Hybrid.

The Turbo S produces 690bhp, thanks to the pairing of a twin-turbocharged V8 petrol engine with the same 134bhp electric motor used by the 4 and 4S hybrids. That gives the range-topper a 0-62mph time of 3.2 seconds and a top speed just 4mph shy of 200mph. Fuel consumption for the Turbo S ranges from 95 to 105mpg according to official testing, which also returned CO2 emissions of 61-69g/km.

As the flagship of the Panamera hybrid range, the Turbo S come as standard with all currently available Porsche chassis and control systems such as the Porsche Dynamic Chassis Control Sport (PDCC Sport) electric roll stabilisation system, which includes Porsche Torque Vectoring Plus (PTV Plus) rear axle steering with Power Steering Plus, as well as the Porsche Ceramic Composite Brake (PCCB) system. 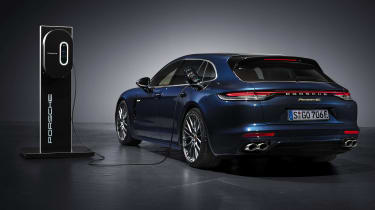 Porsche also claims a 30% increase in electric range over previous Panamera hybrids. An increase in battery capacity to 17.9kWh (compared to the previous cars' 14.1kWh) sees the quoted electric range in city driving conditions rise to between 31 and 35 miles, from the old cars' 22 to 27 miles. Pure-electric, hybrid, charge hold, engine charge and performance-orientated Sport and Sport Plus driving modes are all available.

All three of the 4 E-Hybrid, 4S E-Hybrid and Turbo S E-Hybrid plug-in drivetrains are offered across the full range of Panamera, Panamera Executive (long-wheelbase) and Panamera Sport Turismo (estate, pictured above) bodystyles, although the Executive is special-order-only in the UK.

Exterior design tweaks include the previously optional 'Sport Design' nose styling – made up of air intake grilles, large side cooling openings and a single-bar front light module – now becoming standard on all models.

Elsewhere, the light strip across the tail of the car now runs seamlessly over the luggage compartment lid, connecting the two newly designed LED light clusters. Three new 20 and 21-inch wheel choices have been added to the wheel range; a total of 10 different designs are now available.

All models in the revised Panamera line-up also get improvements to their active suspension and roll-control systems, as well as steering and tyre tweaks, all intended to boost both comfort and handling. 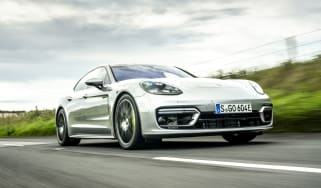