Figures for the Porsche Panamera hybrid are impressive, but how close you come to achieving them will depend on your driving style 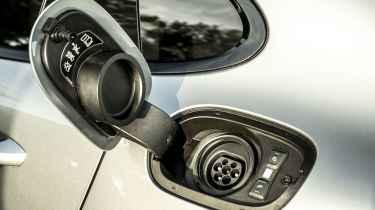 The Panamera 4S E-Hybrid will return very impressive fuel economy if you drive carefully and make sure its battery is kept topped up. Despite the huge performance on offer, the powertrain's willingness to lean on its electrical assistance when it sees fit is good news for economy; on our test, the on-board trip computer hit its digital stop at 99mpg, but was probably returning a figure north of 100mpg in mixed driving.

Failing to keep the battery topped up, either from a home charger overnight or from public chargers while out and about, will result in fuel-economy figures more akin to the standard V6 and V8-engined petrol Panameras, however – so it's vital that owners do this to make the most of their cars.

Official fuel-economy figures for the Panamera 4S E-Hybrid sit at 100.9 to 128.4mpg – impressive for what is a large, fast and heavy car. Official all-electric range is pegged at 29 to 33 miles, but we saw an indicated 35 miles with some charge to spare on our test. CO2 emissions can be as low as 51 or as high as 64g/km depending on specification and wheel size.

The Panamera comes with a 3.6kW on-board charger as standard, along with a selection of charging cables. Charging capacity can be increased to 7.2kW as a cost option, while Type 2 cables are also on the options list.

Exact charging times aren't quoted, but according to our calculations the car's 17.9kWh battery should take around five hours to charge fully at 3.6kW, or around three hours at 7.2kW. It'll be much longer to charge via the domestic three-pin cable supplied.