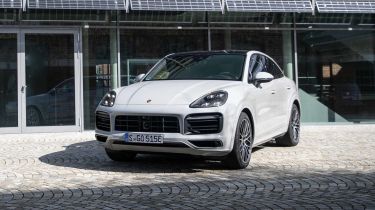 This is the Porsche Cayenne E-Hybrid, the German brand's largest plug-in hybrid SUV. The car has been refreshed for its new model year, with changes focused largely on improving the car's efficiency. The updated cars are available to order now, with prices starting at £69,980.

Changes to both the standard and Coupe models start with a larger battery, up from 14.1 to 17.9kWh. The result, Porsche says, is an increase in range of up to 30%: the Cayenne E-Hybrid can now travel 25-27 miles on pure-electric power, with the more powerful Turbo S E-Hybrid managing 24-25 miles.

Porsche claims fuel economy of up to 91.1mpg from the E-Hybrid version, with CO2 emissions as low as 71g/km. The more powerful car is less efficient, with 74.3mpg fuel economy claimed, along with 86g/km of CO2. Although impressive by sporty SUV standards, neither Cayenne hybrid's CO2 figure is low enough to qualify for the 6 or 10% Benefit-in-Kind tax bands inhabited by most large plug-in hybrids.

Porsche has adjusted the Cayenne hybrids' driving modes to make better use of their electrified drivetrains. E-Charge mode – in which the engine is used to charge a flat battery – now only operates up to 80% charge, down from 100%, which the firm says ensures "that full recuperation power is available at all times". The Sport and Sport Plus modes now operate with a minimum amount of battery charge "to provide sufficient boost options for sporting responses".

Conventional wallbox charging is supported up to 7.2kW and is controllable using a dedicated smartphone app on some models. Elsewhere, heated seats and a reversing camera have been added as standard equipment to all Cayenne models. 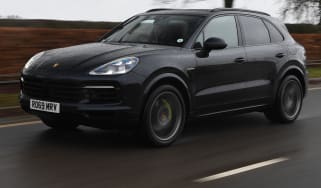