Striking styling and a rakish roofline don't dent the 508 Hybrid's practicality too much; nor does the battery 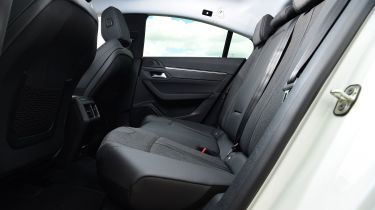 It's marketed as an executive saloon, but the 508 is actually a large five-door hatchback; there's a level of versatility as a result, so the Peugeot makes a little more sense as a family car than a more traditional four-door. Buyers looking for more space will be better served by the 508 SW estate, but the standard car will be flexible enough for most.

What's most impressive is that Peugeot has managed to implement the 508's plug-in hybrid drivetrain without adversely affecting interior space or luggage capacity: the boot is the same size as you'll find in petrol and diesel versions.

The 508 is all about passenger comfort – from its supple, controlled ride to its very comfortable seats. There's not as much space as you'll find in the Skoda Superb iV, but there's still just about enough space for a six-foot-tall adult to get comfortable in the rear seats. Front-seat occupants get buckets of room too, but with a comforting sense of being cocooned by the car's high dash, doorline and centre console. It's a stylish, high-class affair.

Peugeot is particularly proud of the 32 litres of cubbyhole storage that's littered around the 508's cabin. Highlights include a brace of holders in the centre console that get some snazzy lighting on higher-spec models, along with an useful storage tray under the dash that doubles as a wireless phone charger on GT Line cars and above. 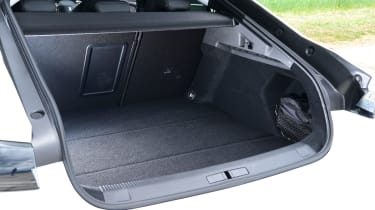 The 508's boot isn't quite as capacious as that in the Superb iV, which offers 625 litres with its seats up. However, the Peugeot's 487-litre bay is still very usable, and if you fold down the standard split-folding rear seats, there's 1,537 litres to play with.

Other nods to practicality include a compartment under the boot floor for cable storage, a pair of coat hooks in the rear and, on Allure cars and above, a rear-seat armrest with two cupholders and a ski hatch. A foot-operated automatic tailgate is featured on GT cars.